The Drag Queen Bingo show will go on in Howell, but without booze

In a victory for free speech that will doubtless be remembered in history books for generations, the Howell Melon Festival will be held, with its Saturday-night Drag Queen Bingo event, to which some in the Livingston County hamlet had objected as "inappropriate" for a "family-friendly event." 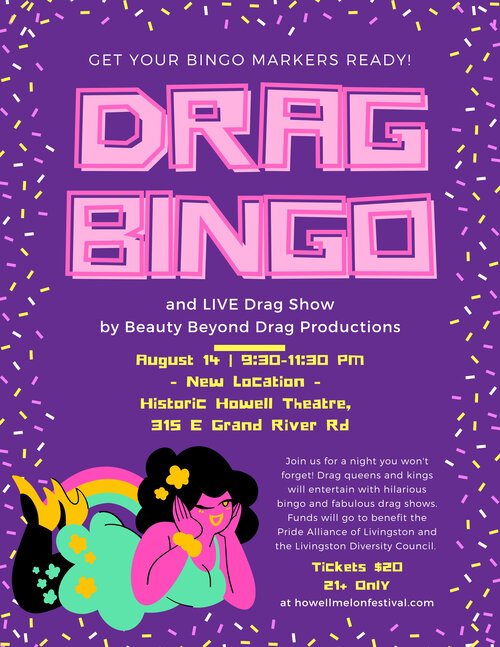 A compromise is reached, WXYZ reports: The bingo will be at a theater, starting at the past-kiddie-bedtime hour of 9 p.m. And no alcohol will be served or tolerated at the Melon Festival next weekend, in hopes of heading off the riotous high spirits that could lead to trouble.

While the thought of a bunch of Howellers flinging melons at drag queens in a drunken brawl might strike you as far more entertaining than a comedy event with bingo, that's the way it's gonna be. Cooler heads prevailed in the business community, WXYZ says:

Howell business owners, including Keith Ridge, owner of Black Iron Coffee, stepped in to save the festival. It is their biggest weekend. They’re still recovering from COVID losses.

“My wife has gone to one. It’s a hilarious comedy show with bingo, not an indoctrination,” Keith Ridge tells 7 Action News.

The early spokeswoman for the bingo opposition was Meghan Reckling, the county GOP chair, although she wasn't interviewed for the TV piece. Rather, average Howellers interviewed on the street told the station they thought the whole thing was silly, but it was nice both shows, festival and bingo, would go on.

Drag Queen Bingo in Howell on Aug. 14 is sold out.