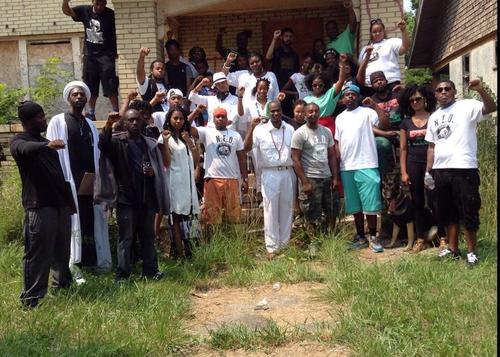 Ramzu Yunus, center in all white, stages an apparent action in front of an abandoned house. (Photo: Facebook)

An advocate for providing free, publicly owned houses and reparations to Detroiters appears to have taken it a step too far and attracted the attention of city police.

Ramzu Yunus has so far convinced more than a dozen people they're entitled to free Land Bank homes and other property as part of a campaign he began in 2016, according to agency spokeswoman Alyssa Strickland. Things have picked up steam in recent weeks as more people share his free housing posts on social media, she said.

Yunus is advertising the program at a "Detroit Free Housing" Facebook page and accompanying URL, detroitgov.us/housing. He also sets up in front of the Coleman A. Young Municipal Center, where Fox 2 reports he this week met a Detroit mother to whom he gave a fake deed. The woman immediately began "investing in the house on the city's east side" to prepare it for rehab, the station reported, and didn't learn it was a "scam" until she called the Land Bank to get keys.

As of Friday, Strickland said the Land Bank had received attempted “claims” on 13 properties, 9 of which it owns, plus a few dozen inquiries "about this misinformation campaign." Yunus seems to be "encouraging people to 'choose' a DLBA or city-owned property, move in, and call to 'claim' it," Strickland said. Personal information is collected in the process and multiple people have reported receiving bogus deeds, she said.

In a phone interview Friday night, Yunus defended the campaign, insisting the properties belong to the public.

"The city charter says the government recognizes its subordination to the people," he said. "The people can organize themselves at any time, especially the Black population that has never exercised its right of self-determination.

"We’re using houses (as an expression of that) because people have a right to live."

The 45-year-old Black nationalist previously lived in Africa and Atlanta, and says he moved to Detroit "to do just what I’m doing" and promote the goal of Black "independence."

Asked whether he feels any remorse for leading people on, he said, "I just feel angry at the opposition. It just gives me more energy to know they must be destroyed. Why would I feel bad about doing something right?"

He said some people have successfully remained in homes they've claimed and that he was working on building up a security force to counter police who may try to evict them.

The Detroit Police Department says it's investigating the claims of the woman interviewed by Fox 2 and advised residents to exercise caution when sharing personal information. Yunus did not answer directly when asked if he'd been contacted by police, but said he was not collecting anything beyond first and last names to place on the "deeds."

"The police and them are all lying," he said, adding that officials assume nefarious motives because they can't conceive of someone doing a selfless act such as his. "The police were there the whole time we were at the Coleman Young building and we’ll be back (Saturday)."

Yunus has issued thousands of "deeds" to Detroiters, he said. It was hard to pin down exactly what shape these "deeds" take. When asked, Yunus responded, "whatever people decide is a deed is a deed, whether it's on a flyer or a piece of toilet paper." 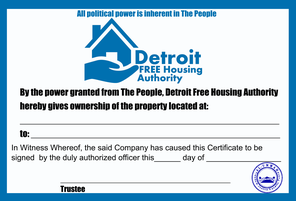 Yunus later supplied us with a copy of what he said was one of the "deeds" he's issuing.

The Land Bank does have squatters living in many of its homes and in some cases helps them become lawful owners. In 2018, about 4,000 of its houses were squatter-occupied.

Yunus has staged various actions demanding #freeland #freehouses and #reparations in Detroit and Highland Park over the past several years. He seeks to reassure skeptical commenters under one post advertising "free homes for the newly independent," saying, "This is very real. I pray you consider."

In other posts, Yunus poses with ex-Zimbabwe president Robert Mugabe and advocates against Covid vaccines and voting.

The home-promiser has run into legal trouble before. A Georgia court ruled last month that Yunus was unlawfully using the term "Reparations Bank" because he had not obtained permission from the state department regulating banking activity. He'd previously violated a cease-and-desist to stop using the word bank in the title, the court said.