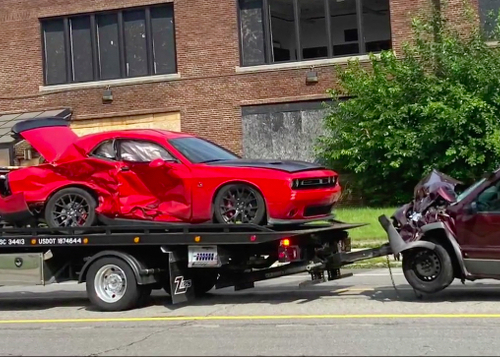 It's another summer weekend in Detroit, and that means there's another unfortunate, headline-grabbing Dodge muscle car incident to share.

The latest, from police and reported by Fox 2: A 20-year-old man driving a stolen Challenger Scatpack with two kids inside fled and crashed into a minivan Friday afternoon after officers tried to stop him near Fenkell and Meyers. Bystander footage taken after the crash shows the 69-year-old driver of the minivan on a stretcher. Police say the children were unhurt.

This is at least the third time the car has been stolen since its original owner bought it in 2018. Of the incident to follow its theft, Bhargava Mangu tells Fox 2:

"...having kids in a stolen car, I don’t think that’s safe or that’s good," Mangu said. "And it’s really sad for me. I really loved that car."

The cars are notoriously easy to steal. Dodge parent Stellantis is behind on providing a fix.