'Welcome to Taylor:' Cop accused of assault and misconduct in driver's arrest

For the third time this week, a young police officer in Wayne County is charged with a crime involving his fists -- a job-ender for the first two in Detroit and Westland. 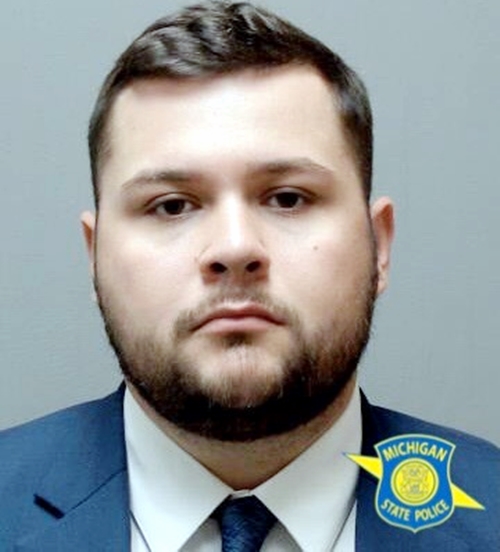 Tyler Peake is off patrol and can't be armed while facing a felony and a misdemeanor.

The latest case making news involves Taylor Police Officer Tyler Peake, 23. He's on administrative leave after being charged with misconduct in office, a felony punishable by up to five years in prison, and with misdemeanor assault and battery, The News-Herald suburban paper reports.

He was given a personal bond [at district court arraignment] and ordered to have no contact with the complaining witness. His CPL [concealed pistol license] also was suspended.

The charges stem from an April 2020 arrest of a domestic violence suspect stopped while pulling into a Marathon gas station on Telegraph Road after his girlfriend called 911 from her Taylor residence. Seven officers were at the scene.

The News-Herald tells what the county prosecutor's office says happened to Brendan Morgan of Southfield, based on body cameras and videos from three police cars:

Peake approached on foot, pointed his handgun at Morgan and instructed him several times to stop his car and to get out. Morgan rolled down his window and raised both hands where they were visible.

It is alleged that Peake then punched Morgan in the face with his right hand through the open window while holding his handgun in his left hand. The prosecutor's office said 10 seconds elapsed from the time Peake approached and yelled commands to when he punched Morgan.

Peake then struck Morgan multiple times after Morgan was forcibly removed from his vehicle by other officers, the prosecutor’s account said. Body camera video of the arrest shows officers pull Morgan from the vehicle after he is punched. A taser gun also is used on him as he lies on the ground.

It shows Morgan complain about being struck by the officers "about 10 times," which is followed by an officer telling him: "Welcome to Taylor."

The sidelined officer is due back in Taylor's 23rd District Court on Sept. 8 and 13.

These are the week's other officers behaving badly: