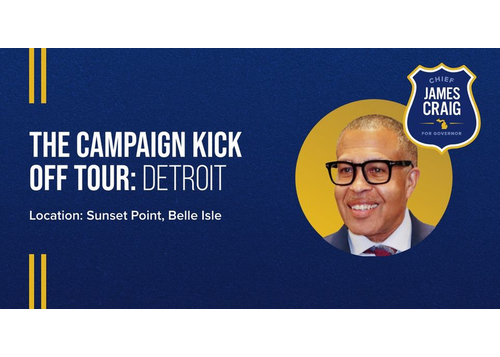 The word leaked days before James Craig's retirement from the Detroit Police Department in June: He was planning to challenge Gretchen Whitmer for governor in 2022. All summer long, the now ex-chief teased his ambition, but always couched it in maybes and exploratory committees.

It looks like he's ready to finally make it official. Craig plans eight events Sept. 14-16, starting in Detroit. He's calling it the Campaign Kickoff Tour, so we guess he's done denying the obvious.

Tuesday's first event will be at 10 a.m. on Belle Isle, followed by one in Flint at 12:15 p.m. and in Grand Rapids at 4:30 p.m. He hits Traverse City the next afternoon, Macinaw City on Thursday morning and then crosses the bridge for three U.P. stops.

After an event in July billed as Craig's "first political speech," in which he reiterated his support for the usual GOP platform planks -- guns, abortion, law and order, etc. -- he announced a "listening tour" of the state, but a Craig spokesman told the Free Press it consisted of informal, non-public events.

The Free Press quotes Rodericka Applewhite, a spokesperson for the Michigan Democratic Party:

"So far, his campaign has been nothing but the same scripted, canned talking points," she said. "And after nearly two months in this primary, voters are no closer to knowing where he stands on the fairness of our elections, abortion rights, infrastructure, or the Jan. 6 insurrection."