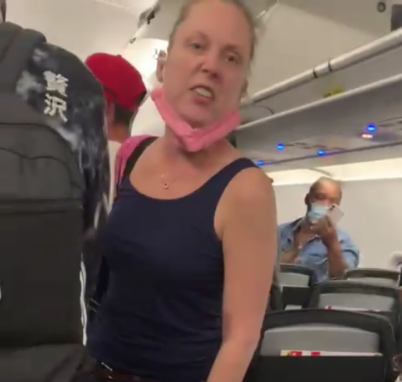 An alleged photo of the allegedly belligerent woman. (Photo: CAIR)

There's another Spirit Airlines attack to report, but this one, which occurred on 9-11, has a hateful twist, the Michigan chapter of the Council on American-Islamic Relations says.

A white woman on a flight from Atlanta to Detroit allegedly called Aicha Toure, a Muslim woman who wears a head scarf, a "Muslim terrorist" then hit her, CAIR says in media release. The airline confirms "a passenger on one of our flights arriving in Detroit chose to use appalling language toward one of our guests" in a statement to WDIV.

The woman was said to be acting belligerent on the flight, harassing minority crew members and a passenger — an older woman apparently of South Asian descent — when Toure intervened on behalf of the passenger. The belligerent woman allegedly "struck Toure with her fist" when she noticed she was filming.

The woman was arrested by Wayne County Sheriff's deputies upon landing. CAIR is now advocating she be charged with a hate crime.

“Michigan’s Ethnic intimidation law was created to protect people like Ms. Toure from being assaulted after being called a Muslim terrorist while traveling on the 20th anniversary of 9/11," said attorney Amy V. Doukoure. "It is imperative that Wayne County Prosecutor’s office take this hate crime seriously and ensure that Muslims are safe from hate and violence in all aspects of their life.”

Spirit Airlines, for its part, says the woman is banned from future flights. "That kind of language has no place on our planes -- or anywhere else," its statement said.