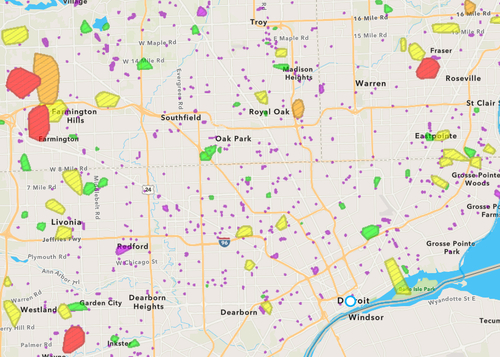 Flooding was limited but nearly 83,000 DTE customers were without power early Thursday after heavy rains and winds battered the region, media reports and the utility said.

The pace of rainfall has kept the flooding in check, with just under 60 reports of water in basements in Detroit as of Wednesday afternoon, the Great Lakes Water Authority told Fox 2, adding that its system is functioning properly. The Detroit News reported brief flooding Wednesday on some lanes of I-94 near the Lodge and Van Dyke in Detroit. Local rivers, the paper reported, posed the greatest flood risk and were expected to crest early Thursday.

Those affected endured yet another headache. Victoria Thomas of Jefferson Chalmers told Fox 2 it was the fifth time water had seeped into her sublevel in three months. Her basement is now so moldy she says can't even enter it.

"City leaders, I think it’s very unfair that we flood when we pay taxes," she said.

The Detroit Water and Sewerage Department has said crews are working overtime to clean catch basins and pump water off streets.

Separately, a Tuesday power-related issue reported at the Freud pumping station, on the city's east side, was resolved, GLWA told Fox 2. A similar problem was believed to have contributed to widespread flooding in June.