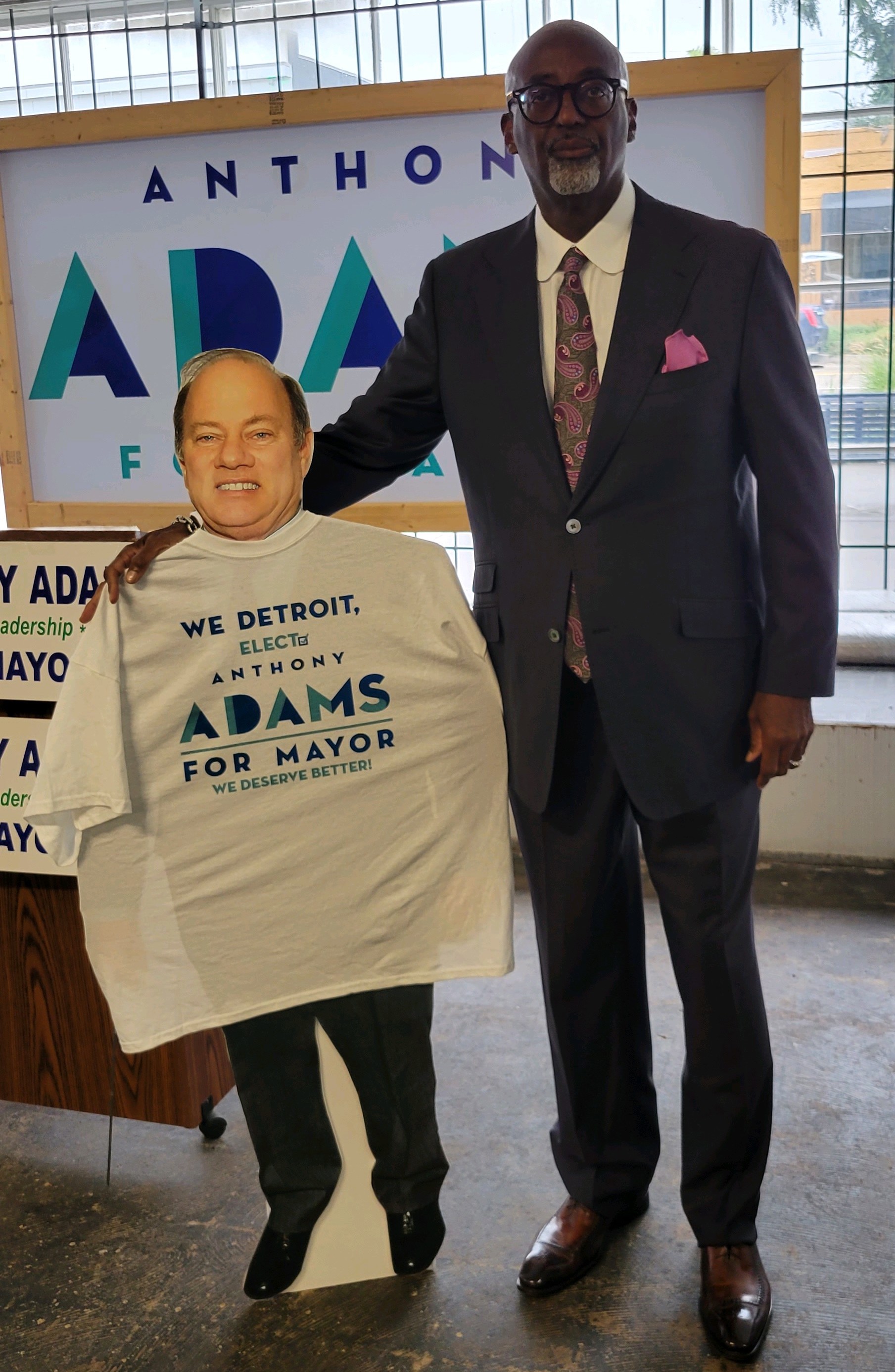 Detroit mayoral candidate Anthony Adams stood alongside a miniature Mike Duggan cutout Thursday and accused the mayor of cowardice for refusing to debate him, while the Duggan campaign for the first time provided examples of what it calls "hateful and divisive rhetoric" by the long-shot challenger.

Duggan has cited that as the reason he won't face off against his more progressive opponent in a forum that that would require he defend his agenda, which includes tax incentives for developers and a lack of compensation for Detroiters overtaxed by a collective $600 million.

Adams, Detroit's former deputy mayor and water department director, reiterated at a news conference that he's focused on the issues as someone beside him held up a mini-Mike cutout, its feet dangling off the ground. He joked that the "mayor," who was sporting an Adams campaign shirt, had "stopped in from Mackinac Island to lend his support to my campaign after refusing to debate in his hometown."

The Duggan campaign had until now not specified what "hateful" behavior it was hoping to avoid, but blasted Adams for saying Thursday that the mayor was "hiding behind the skirt of" his campaign manager, Alexis Wiley.

When pressed by Metro Times for an example of a hateful or divisive statement that caused Duggan to spurn the debate, Wiley pointed to an August tweet in which Adams said "Why is it blacks cant buy land from the Land Bank?" with a link to an article about the slow pace of sales by the quasi-public agency, which owns tens of thousands of vacant properties. She did not respond to an earlier request for comment from Deadline Detroit.

For his part, Adams accused team Duggan of racism for painting him as hostile, saying “We understand that the history of racism in America is that they always try to paint a Black man as an angry Black man.”

The real reason Duggan won't agree to a debate is because he's way ahead in polls and has nothing to gain by providing a platform for his lesser known opponent, political analyst Bill Ballenger said in an interview last week.

Adams' news conference was poorly attended, lending credence to his complaint that the local media is ignoring his campaign. Prior to the event, Adams supporter and former Detroit Charter Commissioner Barbara Wynder, rolled up to local TV news station with a megaphone, urging coverage.

"We're down here at WDIV to bring the news to the news people," she said from a vehicle that read "Detroit Free the Press." "They don't know the news, they're not interested in the news."