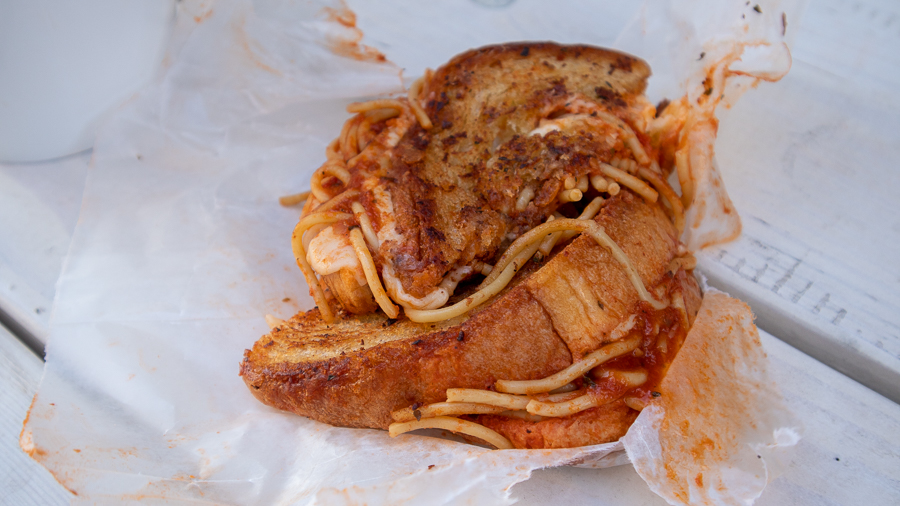 Spaghetti sandwich at the Woodward newcomer.

Playful rapper Eminem refers to the $11 spaghetti sandwich at his new downtown restaurant, Mom's Spaghetti, as "white trash" food he grew up with.

"It's deifintely some white trash shit ... I still eat it today," Eminem said in a taped interview last week on the opening day of his restaurant at 2131 Woodward Ave. alongside Union Assembly in the entertainment district. The conversation with TV and radio personality "Rude Jude" was released Wednesday on YouTube (below).

"You're from Michigan, right?" Eminem, aka Marshall Mathers, asks Jude, who replies: "Yeah, but I'm Italian, so we didn't do spaghetti sandwiches."

Jude backs up a bit and confesses that he does sometimes stuff spaghetti in his garlic bread like a sandwich.

Eminem goes on to talk about food he grew up on. including "hot dogs, spaghetti, mac and cheese, four for a dollar at Kroger. Ramen noodles. "

For now, he says the restaurant will stick to just peddling spaghetti, but eventually: