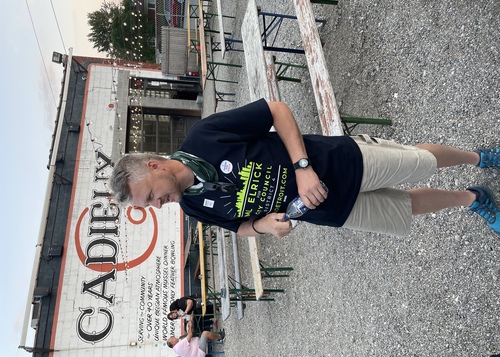 Pulitzer Prizer winner M.L. Elrick, who left the Detroit Free Press to run for city council last year, is returning to the paper to write what he describes as a "government-watchdog column."

Elrick lost his race in District 4 on the city's east side. "The only reason I got into politics was to bring honest change to government," he tells Deadline Detroit. "I'm grateful I'll still have the opportunity to do that."

Elrick has come and gone from the Free Press numerous times over the years.

A Michigan State University graduate, he started with the Freep as a clerk in the Lansing bureau in 1989. In 1999, after working at the Concord Monitor in New Hampshire and the Daily Southtown in Chicago, he returned to the Free Press.

In 2006, he went to work at WDIV, but returned to the paper in 2007. In 2009, he won a Pulitzer Prize with co-worker Jim Schaefer for a series of stories on public corruption involving Mayor Kwame Kilpatrick that led to him leaving office.

In 2012, Elrick went to work as an investigative reporter for Fox 2, and in 2020 left to return to the Freep. He left the paper in January 2021 to run for city council. He lost to Latisha Johnson, who got 60 percent of the vote.

He hosts a podcast called "ML’s Soul of Detroit."