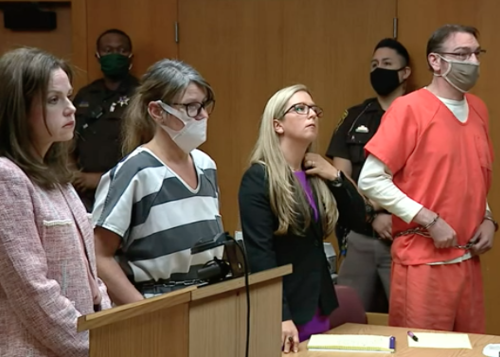 The Crumbleys and their lawyers during a court appearance.

A judge says there's enough evidence for a jury to decide whether James and Jennifer Crumbley's "gross negligence" precipitated their son's shooting rampage in a ruling denying their bid to have the case against them dropped.

The parents each face four counts of involuntary manslaugher for the November killings at Oxford High School.

From the Free Press:

"Sufficient evidence has been presented to allow a reasonable juror ... to conclude that the deaths of the victims were a direct and natural result of the defendants' gross negligence," (Oakland County Judge Cheryl Matthews) wrote in concluding a lower court did not err in binding the Crumbleys over for trial.

Lawyers for the parents argued that only Ethan Crumbley was to blame for the slayings of his classmates.

Still, experts have said prosecutors will have difficulty convicting the parents.