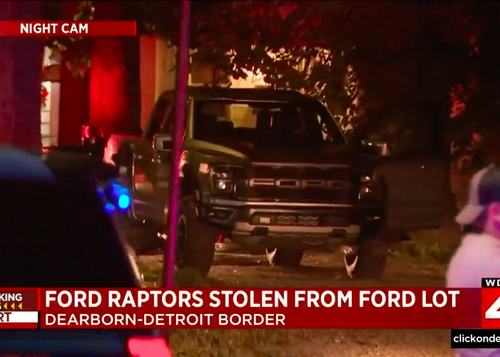 The Ford Raptor, a souped-up version of the F-150 pickup truck, joins the Dodge Charger on the list of Expensive Macho Vehicles Beloved by Thieves. Multiple Raptors were nicked from a Ford Motor Co. storage lot near the Detroit-Dearborn border Wednesday night, leading to a police dragnet to recover them.

WDIV's Tim Pamplin was on the scene near 8 Mile and the Southfield freeway, where cops were recovering some of the vehicles and making arrests.

Raptors were the focus of another mass theft earlier this summer, also from a Ford storage lot. The trucks have a base price of close to $70,000.