Bob Lutz, former frontman for the Chevrolet Volt, doesn't do retirement quietly. Or at all, really.

The high-profile auto exec, who did time at each of Big Three and still lives in Metro Detroit, is now a board member of VIA Motors. That privately held Salt Lake City company soon begins making electric four-wheel-drive trucks, SUVs and vans with a 40-mile battery range and a backup ability to use gas. The models are converted from the Chevrolet Silverado pickup, Cadillac Escalade and a GM van. 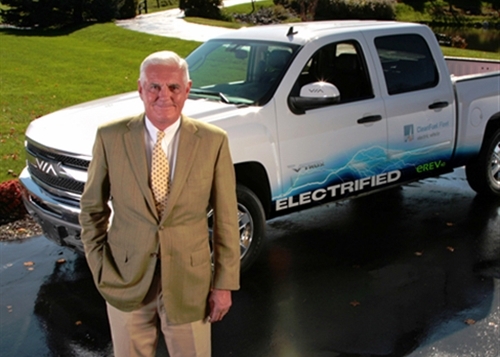 Bob Lutz poses at his Detroit area home with VIA Motors' hybrid electric-gas pickup, which uses a Chevy Silverado body.

Lutz will promote the line at a Jan. 14 media briefing during preview week for the Detroit auto show, where VIA will have two displays. More recently, the silver-haired former vice chairman who left GM in May 2010 gave a media briefing at the LA Auto Show's main stage last month. (See second video below.)

As part of the rollout, Lutz speaks with automotive writer Susan Carpenter of the Orange County Register in Southern California. Here are excerpts:

• Personal image: "I am what I am. To some people, I am the environmental Antichrist because I own and fly a former military jet fighter. I have what is known as a very large carbon footprint. I like high-powered cars like Corvette ZR1s, but on the other hand people have trouble figuring me out because I'm also deeply involved and a believer in vehicle electrification."

• Volt vs. larger vehicles: "Bigger trucks are the only electrified vehicles that I know of that make instant economic sense because the fuel saving is so large that you will more than get back your monthly lease price."

• Industry error: "We started at the wrong end. The whole automotive industry made the intellectual mistake of thinking EVs were all about maximum range, so we all started with small vehicles that are basically very economical anyway. . . . It makes less sense to take a 40 mpg vehicle and make it electric than it does to take a full-size pickup truck or SUV. . . . The realization came to me suddenly -- late -- that the right place to electrify is at the heavy end, with full-size pickups and SUVs, which America loves but which are a somewhat endangered species with fuel economy regulations."

• GM vs. Toyota: "What annoyed me in 2005, 2006 was all of this credit that Toyota was getting for the Prius. Only the Japanese, only Toyota could do this. General Motors had hybrids like that running in 1968. We just never elected to produce them. . . . That was a mistake. But I continually said we need to do something to get GM's reputation for advanced technology back.."