Weather talk is all over social media, blogs and news sites in Metro Detroit. Lisa Taylor of Walled Lake posts on Facebook that it snowed "so much that my dogs can't find their way to potty!"

The so-called polar vortex caused hundreds of injuries across the Midwest today, as people who said “so much for global warming” and similar comments were punched in the face. . . .

The meteorology professor Davis Logsdon, of the University of Minnesota, issued a safety warning to residents of the states hammered by the historic low temperatures: “If you are living within the range of the polar vortex and you have something idiotic to say about climate change, do not leave your house.”

Below is more of what we spotted so far. Join readers who're sharing their photos at our Facebook page.

'We used to be stronger'

After acknowledging that she typically dislikes nostalgia and crotchetiness, Grosse Pointe Woods blogger Nancy Nall Derringer dishes dollops of each in a post headlined "In my day, we were cold." She derides a Washington Post description of subzero temperatures as "astonishing."

Climate change has . . . blunted the common experience of winter at this latitude.

Two years ago, I saw the first daffodils starting to push through the soil in January, a phenomenon I find far freakier than a couple days of bitter cold. People my age around Detroit talk about skating to Canada when they were children. Henry Ford drove one of his cars around a racecourse on the Detroit River ice. Bootleggers routinely ran trucks back and forth across the frozen waterway. All of these things would be exceedingly rare today. . . .

Friends, we used to be stronger. We still can be. Bundle up.

One of Derringer's readers named Sherri recalls her teen years in Clarksville, Tenn.:

I remember being out of school basically the entire month of January in ’78, because we’d get about six inches of snow once a week, and had no real means of dealing with it other than to let it melt. Very few snowplows, not much salt, a population spread out enough that everybody has to ride a bus to get to school, and the result was that we had so many snow days we had to make them up on Saturdays in order to get out of school at a reasonable time for summer.

Lauren Podell of WDIV tweets early this morning about her wardrobe for outside reporting:

I have so many layers on I'm starting to feel claustrophobic! #WinterStorm2014 #reporterproblems

At least we're not in California

At his Warrendale Blog, film producer Frank Nemecek of that west-side Detroit neighborhood suggests keeping this week's conditions in perspective:

One of my brothers is referring to this as the Snow Storm of Death. . . . For everyone who is freaking out, I would simply like to say that every part of the country has their own natural disasters to deal with.

I believe these things are simply God's way of reminding us who is in charge on this planet. Here, by the way, are a few examples of what people in other parts of the country have to deal with:

In Michigan, all we have is snow. Sometimes, we have lots and lots of snow. It can be a pain the butt to deal with, but I'd rather deal with snow than any of the things listed above.

A WDIV videographer posts a half-minute dashcam digest of his drive downtown -- which included shoveling to get unstuck on a freeway ramp. “My car simply couldn’t clear the blowing snow on the ramp from I-275 N to I-96 E.,” posts the suburbanite, identifying himself as “Mike the Photog.”

These are among social media posts Monday. Join readers posting theirs at our Facebook page.

"The picnic on the deck is going to have to wait a few days," WXYZ anchor Stephen Clark posts on Facebook from Commerce Township.

"I'm so happy I bought my truck," posts Virginia Rose, a pottery artist in Flint. 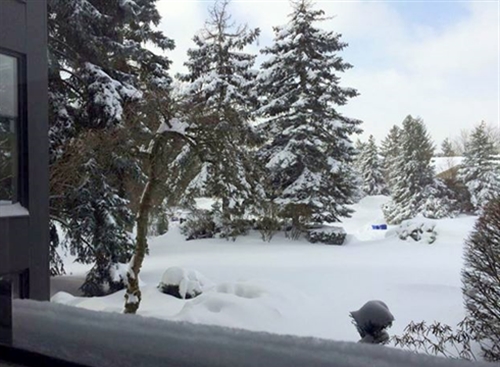