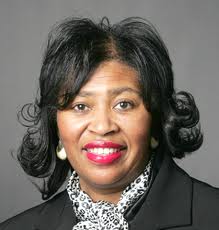 The new City Council on Monday elected Brenda Jones as its president.

Jones was an outspoken opponent of Gov. Rick Snyder's appointment of Kevyn Orr as emergency manager, and she even voted against a compromise plan for a state lease of Belle Isle.

For the moment, though, Jones has little power while Detroit remains under emergency management.

Christine Ferretti reports in the Detroit News the race for the president’s seat was between former president Saunteel Jenkins, a second-term council member, and Jones, a third-term councilwoman. The two at-large council women publicly competed for the spot, with Jones beating Jenkins in a 5-4 vote.

In a subsequent 5-4 vote, the council then elected Cushingberry as its pro tem. He beat out the council’s former pro tem, Andre Spivey.