Fernando Plazuelo, the investor who paid $405,000 for the Packard plant site, is staying at the Inn on Ferry Street this week and has a series of meetings at the North American International Auto Show and elsewhere to talk up his plans. 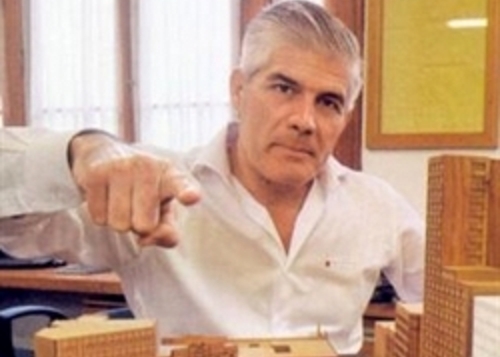 He gives JC Reindl of the Free Press a preview:

The Spanish born-developer plans to spend his time networking with industry executives and aggressively pitching his vision for redeveloping the 40-acre site with modern factory space to attract auto suppliers and other manufacturers back to Detroit.

Since buying the site last month, Palazuelo has hired 24-hour security patrols and is working to assemble a development team and drum up tenants. He also is trying to persuade local and state development officials to chip in money for road and rail upgrades around his new property, he told the Free Press in an interview Saturday. . . .

Palazuelo said he has several meetings in Detroit this week related to financing. He estimated the total price tag at $350 million.

His long-term vision is to redevelop the site as a mixed-use project over a period of 10-15 years or more. He plans to save some of the old factory buildings and build new ones to suit future tenants. Market demand will dictate the timetable of the redevelopment, he said.

In addition to auto suppliers, he hopes to attract other light-industrial businesses, green-energy companies and firms that specialize in basic outsourced office functions. He wants to add retail, residential and cultural components in the future, and perhaps a high-end go-kart racing track. . . . “This is a big dream,” Palazuelo said, “but we’re going to try it.” . . .

Palazuelo reaffirmed his plans to make Detroit a second home and pledged to have a personal apartment on the Packard grounds by the spring.

The 58-year-old builder of redevelopment projects in the capitals of Spain and Peru, who has been dubbed an urban conquistador, says he's charmed by Detroit.