Update: Detroit Police Chief 'Not Backing Off' Amid Death Threat

Detroit Police Chief James Craig is angry and defiant after getting a social media death threat, apparently from a drug dealer.

"This reinforces what we do,” Craig said at a media briefing Sunday, Shawn D. Lewis reports in The Detroit News. “I’m the people’s police chief. The people want me to do this.”

He was referring to mass arrests in five anti-drug sweeps since November.

The chief, who took office last June, looked into news cameras as he voiced a message for whoever posted Friday's warning with a handgun photo: “We will find you. We’re not backing off.”

Craig said the threat was worded in street slang: “We need to clap him out.”

Detectives from his force are bolstered by federal agents as they hunt the potential assassin. Craig calls the online antagonist a “coward and a member of a gang and/or criminal narcotics network,” Lewis adds.

"This narcotics network extends beyond the city of Detroit, and I’ve already reached out to my colleagues in Los Angeles." . . .

He said he is not afraid and will not increase security. “The one word to describe how I feel is anger,” he said.

Detroit's new top cop is so effective he's the target of a hit after eight months on the job. 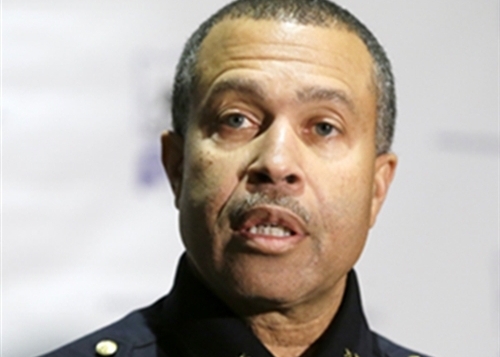 "We’re taking this seriously, which is why we’ve gotten our federal partners, along with the State Police, involved," Chief James Craig says. (AP photo/Carlos Osorio)

"This is the kind of thing that happens in Third World countries," Chief James Craig says, according to police beat veteran George Hunter of The Detroit News:

The FBI and local police are investigating a threat to kill Police Chief James Craig, the chief said Saturday.

The threat, made over the Internet by a man believed to be a drug dealer, was uncovered Friday, Craig said.

“We got information that a dope dealer basically said ‘We need to take the chief out,’” Craig said. “We investigated it, and it was deemed a credible threat. . . . We’re taking this seriously, which is why we’ve gotten our federal partners, along with the State Police, involved.”

The new chief's impact is noticeable on the streets. He ordered five large drug sweeps since November -- most recently on Thursday, when 43 suspects were arrested at 14 sites.

Craig believes the man who made the threat is upset because heightened drug-house raids cost him cash, Fox 2 News reports Sunday.

Craig, recruited last spring from Cincinnati,  tells Hunter it’s the first time in more than 30 years in law enforcement that his life has been been seriously threatened.

The chief began his career in 1977 with the Detroit Police Department before spending 28 years at the Los Angeles Police Department. He then served as chief in Portland, Maine, and Cincinnati.

“This has never happened to me, and colleagues in other places I’ve worked have not been threatened like this,” he said.

“I want to be there when we get this guy. I want to look him in the eye. You don’t threaten any police officer, let alone the police chief.”