For The Fifth Time In Two Weeks, A Detroit Homeowner Has Killed A Burglar 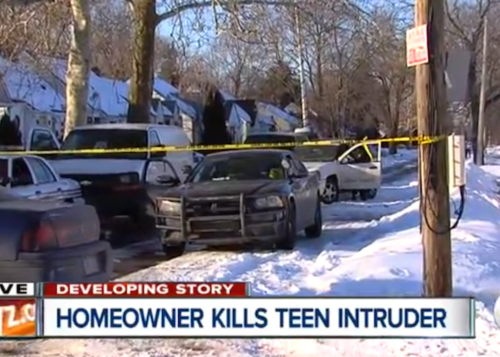 Another Detroit homeowner has shot and killed a burglar, George Hunter reports.

It's at least the fifth such incident in recent weeks.

Thursday’s shooting happened at about 12:30 p.m. when two men allegedly broke into a home on the 8200 block of Penrod on the city’s west side, Detroit Police Third Deputy Chief Rodney Johnson said.

“The homeowner was able to retrieve his weapon, and fired hitting one of the burglars,” Johnson said. “He ran away and collapsed in the driveway. The other burglar was able to escape.”

His suspected accomplice, a man in his 20s, fled the scene and is still at-large.

“When we look at the good community members who have concealed weapons permits, the likelihood they’ll shoot is based on a lack of confidence in this Police Department,” Craig said at a press conference.

Unlike most big-city police officials, Craig said he began believing that legal gun owners can deter crime when he became police chief in Portland, Maine, in 2009.

“I changed my orientation real quick. Maine is one of the safest places in America. Clearly, suspects knew that good Americans were armed.”