This Feb. 3 repost, updated with the current fund-raising total, is the runner-up in our Top 10 countdown of most popular 2015 content. Links to earlier installments are at the end.

A profile of determination that Bill Laitner presented on the Free Press front page Feb. 1 is too good to stay local.

His account of James Robertson's daily odyssey by buses and foot from Detroit to a Rochester Hills plastics factory job is picked up Monday by major U.S. media, a British daily and an Australian news site.

Yes, you read that amount correctly.

An impromptu effort that WSU junior Evan Leedy of Troy launched Feb. 1 to gather money for a used car now totals six figures. He also is offered a new car by Honda North America and Rodgers Chevrolet in Woodhaven.

The phenomenal response, originally inspired by Laitner's skilled storytelling and his 56-year-old subject's graceful humility, also is being propelled by national and overseas articles linking to the donation site.

"Is this the hardest-working man in America?" asks a headline in The Daily Mail, a U.K. newspaper. 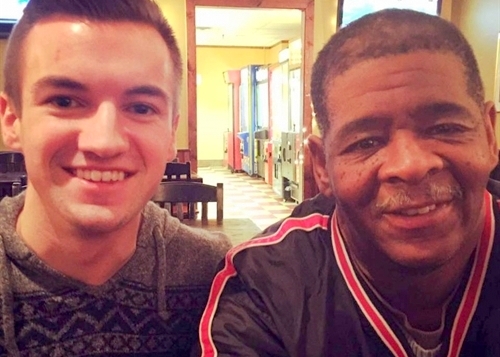 Coverage also appears today on CBS This Morning and in The Atlantic, where David A. Graham's lead sentence says: "America needs more people like James Robertson."

Leedy said he initially set the goal to $5,000, which was reached within hours. . . . Leedy hopes to buy Robertson a car, pay for his insurance and provide professional help in managing the donations.

“Most people in that situation quit their job,” Leedy told MSNBC. “But he has been with his company for 10 years, and he didn’t want to give that up, and he does whatever it takes to get there.” . . .

Leedy, who attends school in Robertson’s Detroit neighborhood and works near the factory, said he drives about 70 miles each day. “I’ve complained about an hour’s ride home, but to see this guy, who walks eight hours a day, 21 miles a day, that’s incredible. He walks almost a marathon every single day.”

“I would love to see it turn into way more than a car. We could help this guy move into his own house or move closer to his work,” Leedy added.

Here in Detroit, M.L. Elrick of Fox 2 speaks with Robertson for Monday night newscasts. While Elrick mentions Laitner's instrumental role, a tweet from the station could create an impression that its reporter breaks the story:

8. Detroit Is a ‘Pretty Dangerous’ Place to Film – Ryan Gosling

7. ’I Apologize,’ Carmen Harlan Says About Remark Blasted as ’Dangerous’

6. Time for he Detroit Athletic Club to Remove Swastikas -- Lengel

5. Writer Takes Old Chicago Road Instead of I-94 from Detroit to Chicago

3. ’What Gives?’ Ex-DJ Asks About Allyson Martinek; Petition Is Posted