After taking flak for his stance on mass transit, Macomb County Executive Mark Hackel said it would be “insane” for Macomb to participate in the new transportation plan proposed by neighboring counties because his county's taxpayers would pay more than those in dozens of suburban communities. 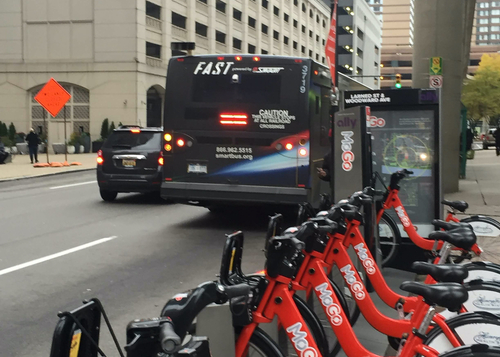 In an interview with Deadline Detroit, Hackel defended Macomb’s decision to stay out of the partnership announced Monday by officials from Wayne, Oakland and Washtenaw counties, including Detroit, which would create a new tax to get the fledgling Regional Transit Authority (RTA) rolling.

All 27 Macomb municipalities pay the current tax for the suburban bus system, Hackel explained, while about 50 cities and townships in Wayne and Oakland have opted out. If a new tax plan is forthcoming, Macomb would pay two taxes – one for the bus system and another for an expanded regional mass transit network – while the opt-out communities would pay one.

“This is insane,” the Democratic executive said. “Nobody would go for this. That, in itself, would be a deal breaker.”

The plan would rely on a change in state law by the Republican-controlled Legislature that would allow the counties, now with Washtenaw in the mix, to launch a ballot proposal in November 2020 that would collectively generate property tax revenues to fund the RTA. Individual communities would not have an opt-out provision.

It seems clear that Detroit Mayor Mike Duggan and Wayne County Executive Warren Evans decided to bypass Macomb after Hackel has spent two years asserting that Macomb would gain relatively little from a second layer of regional transit services. Also, it should be much easier to get an RTA tax passed if Macomb is cut out of the picture.

“This is not about transit service,” Hackel said. “It’s about getting new legislation so those communities have to pay. It’s so glaring.”

The first RTA tax, a 1.2-mill tri-county ballot proposal in 2016, lost by a narrow margin as Macomb County voters tipped the scales, rejecting the plan by a 60-40 percent gap. Two years later, transit advocates pushed for a revised, more expensive plan of 1.5 mills – a cost of about $80 to $90 a year for a homeowner with a $150,000 house.

The proposal never made it to the ballot in part due to staunch opposition from Hackel and the late L. Brooks Patterson, the long-serving Republican Oakland County executive who died in August. The political dynamics changed dramatically when David Coulter, a Democrat and former mayor of Ferndale, was appointed as Patterson’s replacement and took a very different route.

Evans, the leading advocate of a more comprehensive regional transit network, has called the new partnership – with Washtenaw, without Macomb – the “coalition of the willing.” In response, Hackel said Macomb was ‘’all-in from day one” to provide a millage for SMART while many city councils and township boards in the Wayne and Oakland opted out.

Beyond the debate over money for express buses and commuter trains, it remains abundantly clear that road improvements are a much higher priority for Macomb residents.

In the combative election of 2016, when Macomb voters backed Donald Trump by a wide margin over Hillary Clinton for the presidency, they spurned the transit tax by an even wider margin.

It seemed that a formidable anti-transit attitude had seeped to the surface.

Two years later, Macomb voters who had embraced the SMART millage in elections over the past two decades barely approved the 2018 bus millage renewal, with 39 votes to spare.

While Macomb is free to join the pro-RTA partnership in the future, Hackel warns that if tax hikes to fund a more elaborate transit system for the region are continually pushed onto the county’s voters, they might retaliate by rejecting the next SMART millage renewal and shutting down all bus services in Macomb.

“Macomb County residents don’t want to hear about this,” he said. “They’re done talking about it.”