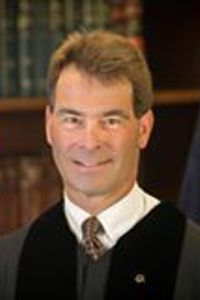 Judge David Parrott of 34th District Court in Romulus is charged with domestic violence assault and battery in a weekend incident.

Parrott, 59, is accused of assaulting a 55-year-old woman described as a partner by the Wayne County Prosecuor's Office.

The incident took place on Saturday around 7 p.m. at a home in Van Buren Township that the couple shares.

Police went to the home where the woman alleged that Parrott assaulted her, resulting in a bump on her head, a laceration on her right hand and pain to her tailbone, according to a the Wayne County prosecutor. An investigation at the scene resulted in the judge's arrest.

He was arraigned on Monday in Plymouth and released on a $2,500 personal bond.

The Detroit News reports that the judge also faces a drunken driving charge stemming from a traffic stop on Christmas Day 2018, according to a prosecutor in Manistee County, south of Traverse City.

After graduating from De La Salle Collegiate High School in Warren in 1978, he earned a University of Michigan degree in political science and economics in 1982 and added a Wayne State University law degree three years later, his LinkedIn page shows.

Parrott won his judgeship in November 2002 and was re-elected in 2008 and 2014. His current term runs through December.