Traded Lion Darius Slay: 'I didn't have that much respect for Matty' Patricia 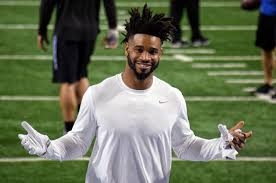 Detroit Lions cornerback Darius Slay, traded Thursday to the Philadelphia Eagles for a pair of draft picks, didn't hold back on his contempt for Coach Matt Patricia.

"I didn't have that much ... respect for Matty P, as a person. It was hard for me to play for him," Slay told WJR.

He said things were not that great early on when Patricia took over in 2018. It got better in 2019, but never was great.

"Of course I wanted to stay [in Detroit] for a minute, but I already knew how me and Matt Patricia is, that wasn't going to last long," Slay said.

Slay tells WJR the two clashed at times, and he specifically complained that Patricia insulted him about offseason workouts with star 49ers cornerback Richard Sherman.

"He told me I had no business working out with Richard Sherman and (Aqib) Talib because I wasn't elite," Slay said. "Those were the guys that were elite category and I was just good.

"That's the whole point, I didn't get the thought, sitting here telling me not to go work with somebody, I'm not elite," Slay said. "If I ain't elite in your eyes, at least I'm trying to go compete with guys and work with guys, pick their brains and become elite."

He also wasn't happy when the team traded his friend Quandre Diggs. Slay tweeted at the time:  “WTF...This some bull shit here."

He did express graditude to Detroit fans.

Detroit! Ya’ll have been so good to me & my family. I’m going to miss all the fans & showing the city love. I appreciate the fans, coaches, staff & City. Nothing but love & respect to y’all. To my Eagles fans, ya boii is READY TO WORK! @MeekMill whats goooood! #Eagles #FlyHigh pic.twitter.com/gnhf1IpmjD