We need this now.

Royal Oak has three newcomers, with two more on the way in a nesting box on the Detroit Zoo's iconic water tower on Woodward at 10 Mile. Five brown peregrine falcon eggs have incubated for more than five weeks under their mother, and occasionally their father, in view of a livestream video feed.

The egg-warming, between turns hunting pigeons and songbrids, is followed by the first three hatchings Wednesday morning, apparently around 10 a.m. One parent soon brought a fresh bird carcass, plucked off meat bits and fed them to the brood.

The female falcon then nestled back atop the chicks and remaining two eggs on a damp day.

Live cam scenes will become even more captivating now as the hatchlings with fluffy white down explore their lofty perch and await feedings of insects and bird bits. Alas, there is no audio. 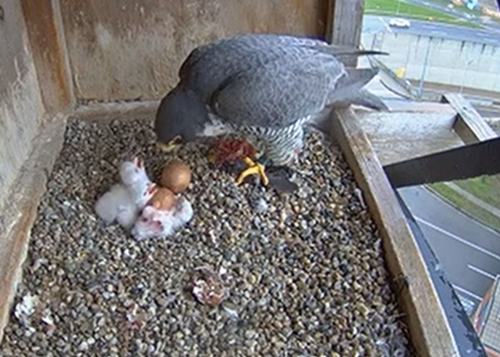 Welcome to the world, hatchlings.

Feathers emerge in three to five weeks, followed by the first flights a week or more after that. The newcomers will start hunting in two to three months, a PBS post says.

The male parent hatched in 2012 at the Jackson County Tower Building, according to the zoo, and its mate hatched at the Racine County Courthouse in Wisconsin in 2016.

Peregrine falcons, which can reach 220 mph in flight, are raptors that eat rodents and other birds. They're usually cliff-nesters, but urban ones perch atop skyscrapers and other buildings.

This Metro Detroit family, safe from the pestilence plaguing human neighbors, is a welcome sign of renewal and normalcy. 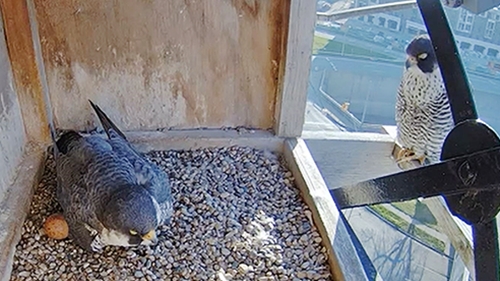 Parents at the nesting box April 27 as this week begins. 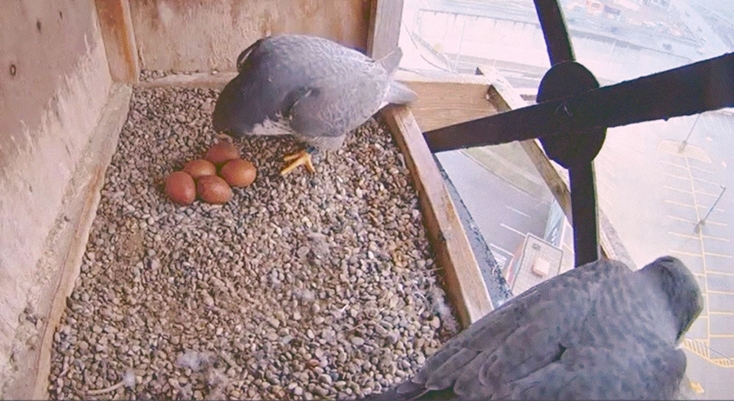 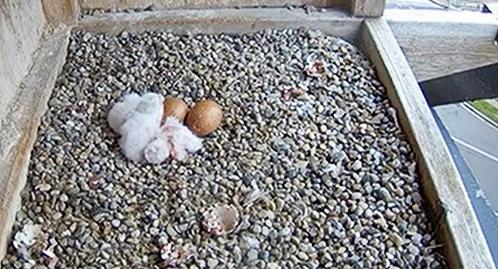 The first hatchlings at 10:30 a.m. today, alongside two future siblings.