'A difficult decision:' Justin Amash tells why he won't run for president in 2020

The fifth-term congressman from West Michigan, who formed an exploratory committee April 28 to seek the Libertarian presidential nomination, announces a turnabout Saturday afternoon on social media. The 40-year-old politician quit the Republican Party in July 2019 to become an independent.

I've been exploring a run for president as the potential nominee of the Libertarian Party. I've spent nearly three weeks assessing the race, appearing in media, talking to delegates and donors, watching the Libertarian Party’s convention plan unfold, and gathering feedback from family, friends and other advisers.

After much reflection, I've concluded that circumstances don’t lend themselves to my success as a candidate for president this year, and therefore I will not be a candidate.

This was a difficult decision for me, especially having seen grassroots supporters put so much effort into this campaign. It's been humbling and awesome.

I continue to believe that a candidate from outside the old parties, offering a vision of government grounded in liberty and equality, can break through in the right environment. But this environment presents extraordinary challenges.

Polarization is near an all-time high. Electoral success requires an audience willing to consider alternatives, but both social media and traditional media are dominated by voices strongly averse to the political risks posed by a viable third candidate. 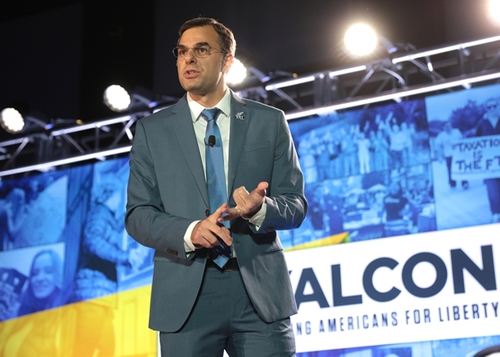 Rep. Justin Amash: "Most Americans are understandably more interested in what life will look like tomorrow than they are in broader policy debates." (Photo: Gage Skidmore)

The new reality of social distancing levels the playing field among the candidates in many respects, but it also means lesser-known candidates are more dependent on adequate media opportunities to reach people.

Today, most Americans are understandably more interested in what life will look like tomorrow than they are in broader policy debates, and news coverage has reflected those priorities. At the same time, fundraising challenges posed by an idled economy will hinder advertising.

The Libertarian Party’s national committee members and delegates have worked diligently to organize the national convention, but lingering uncertainty regarding ratification of online voting, the feasibility of 50-state ballot access and related legal challenges, and unity after the nomination have also weighed heavily on me. We must address these issues as a party to ensure we maximize our potential.

I’ve been speaking directly to delegates about this opportunity for only a short time, but these conversations have solidified my belief that the Libertarian Party is well-positioned to become a major and consistent contender to win elections at all levels of government. I remain invested in helping the party realize these possibilities and look forward to the successes ahead.

If you aren’t already a member of the Libertarian Party, I encourage you to join me in becoming one so we can continue working together toward freedom, peace and prosperity.