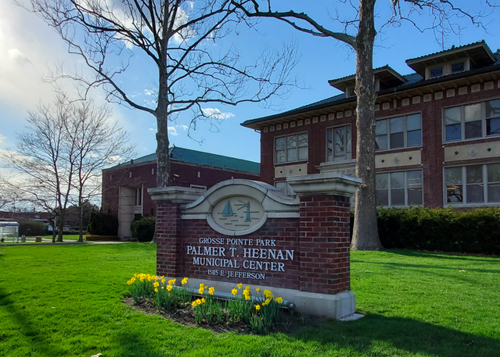 Grosse Pointe Park police officials say they're reviewing the officer response to a report of a KKK flag displayed at a house.

Police came Tuesday to the home of JeDonna Dinges, who is Black, after she wrote on social media that her next-door neighbor hung the provocative flag in a window facing her dining room. The incident was first reported by Deadline Detroit.

On Wednesday, the city said its public safety department was "reviewing the facts and its records to ensure its officers have consistently acted appropriately and in accordance with policy" and that it would pursue legal action against whoever hung the flag, if possible.

"We are committed to ensuring the safety and security of all residents of this community and we take every matter brought before our department seriously," the city said in a Facebook post. "Intolerance, hate, and ignorance have no home in the Park. Threats, either real or perceived, will not be tolerated."

Dinges told Deadline Detroit she didn't call police because she didn't think they'd help. She recently alerted them to a full can of gasoline she found in her trash receptacle "sitting like a firebomb waiting to explode," but said they told her they couldn’t take fingerprints or do much to investigate. The incident prompted her to put a camera on her home.

At the request of friends, she did call the Detroit field office of the state attorney general's office about the flag, but said she was told there was nothing they could do because it was on private property inside someone’s home.

Dinges says Grosse Pointe Park police interviewed her neighbors Tuesday and were told the flag was hung in response to the camera.

Democratic State Sen. Adam Hollier, whose district includes Detroit and Grosse Pointe Park, commented on the issue in a speech Wednesday and called for stronger laws to address intimidation.

After an arson threat, a Black resident of Grosse Pointe Park got a security camera for the side of her house. In response, her neighbors hung a KKK flag in their window aimed at her. We need stronger laws to protect people from such acts of intimidation. https://t.co/aDuUZCg8rU pic.twitter.com/WF2wYEDKGZ