This lightly edited excerpt is from a Facebook post Wedneday by Dearborn's fourth-term Democratic congresswoman, who shares diary-like reflections daily on her personal page.

I don't talk much about what our office or I hear daily or the threats we get, but I want to share a little to give you some perspective.

We receive regular hate and death threats every week. I don’t like to report them because I don't want to seem like Chicken Little, but the police have told me I must so they can follow patterns. Imagine what it is like to be in your early 20s and hear some of the most disgusting language you can imagine. My young staff has heard some very offensive hate.

We have one visitor who has left excrement on our district office door more than once, called endlessly, threatened others and eventually was arrested for his behavior. He suffers from mental health issues and my staff is very scared. I work with officials to get him help.

That same week as one of those visits, a man walked into the district office with an assault weapon. A task force in Detroit of multiple law enforcement agencies identified him and arrested him that week.

Glass has been left in my driveway to do damage. Men have been in front of my house with assault weapons. Letters arrive in the mailbox at home with more death threats.

Pete Musico, one of the men charged after allegedly plotting to kidnap Gov. Gretchen Whitmer, had previously called for me to be "hung" on a social network used by the far right. 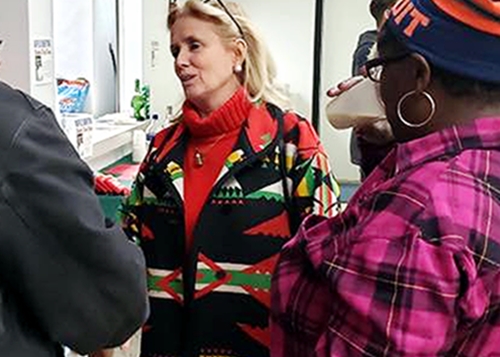 Debbie Dingell: "My young staff has heard ... some of the most disgusting language you can imagine." (Photo: Facebook)

Matt Synder, our former [interim] U.S. attorney who became a good friend, called and told me he knew I didn’t want to press charges on another threat (I knew the man had mental health issues), but I had to because he would do real harm and could kill me. The local prosecutor delivered a similar message on another person, saying he had outstanding warrants for domestic abuse and wouldn't hesitate to hurt me.

My police chief at home [Ronald Haddad] has gotten to know a lot of these guys and has lectured me on taking them seriously. He said about one this year: "The good news is we know where he lives. The bad news is it's near you and he owns guns."

I share this with you today, and won't talk about again for a long time, because this is the kind of hate we are seeing in this country. ... The last four years have been really tough ones. This country has been divided by fear and hatred and our law enforcement have been dealing with many of the consequences.