Gretchen Whitmer's two-day zip to Florida last month is a hot topic among her defenders, as well as detractors.

"She went to visit her sick father -- it's not like she went to Cancun," posts Detroit News reader Camille Krol of Detroit.

The visit to her reportedly ailing dad, confirmed Monday without reference to the March dates or location, stirs predictable outcries from political rivals. "Gretchen Whitmer's blatant display of hypocrisy is an insult to every single Michigander impacted by her lockdown orders and travel warnings," the Michigan Republican Party's communications director, Ted Goodman, posted Monday night. "They tried to keep it a secret because for Whitmer, it's rules for thee, but not for me."

By mid-afternoon Tuesday, the party felt a need to clarify:

The issue is not that Gov. Whitmer wanted to visit her father, it's that Michiganders were denied the same opportunity through her rules that locked people from visiting their loved ones in hospitals and nursing homes.

Whitmer's belatedly disclosed decision to fly south before her first Covid shot April 6 stirs compassion, along with more numerous critiques, in media site comments and on social media. "Nothing would stop me from visiting my sick father," Metro Times reader Monica L. Jones of Detroit posts on Facebook.

Bobcat Bonnie's restaurant group owner Matthew Buskard reacts similarly at that thread of about 150 comments: "For heaven’s sake, can we all stop ... being so shocked that she's a human?"

As a counter-balance to name-calling and accusations of hypocrisy that outnumber expressions of sensitivity, these are among supportive comments online:

► Don't be 'nonhuman:' "The governor’s father is aged and sick. Why do you need to act like a nonhuman and even question why she would go? The sympathy of the GOP is less than zero. – Dennis T., at Freep site

► "Ailing father seems like a reasonable reason for travel." – Staci Lichterman of Oak Park, in tweet reply to a Crain's reporter

► Necessity vs. socializing: "She didn't tell people not to help their sick parents when it was a necessity. She said not to go on social visits. She didn't go on a social visit." -- Jahvid Sanders, at Reddit thread under link to our coverage

The governor can’t even visit her sick dad without being attacked for it. I’m beginning to think these guys aren’t acting in good faith

► "Who gives a care? We are not under a stay-at-home order. Mind your own dern business and follow the CDC." – Carmen Evans of Detroit at Detroit News site

► Not a vacation: "People don't understand the difference between taking a spring break vacation and traveling to help a sick parent." -- John Durso of Southfield, LinkedIn reply to Crain's writer

In the public light people with ridicule you for living a very normal life and gaslight you non stop.. let folks be human... we are not robots. https://t.co/YiQOFTvm1a

► "So what? Her dad was sick." – Sandi Davidson of Warren, at Metro Times' Facebook feed

► Glass houses and stones: "Perhaps we should do some investigative journalism to find out where all the Republican critics have been taking their families for spring break? Those who live in glass houses should not throw stones!” – Gregory S., Freep subscriber at its site

► "I would not criticize anyone for visiting an ill parent. I was able to hold my mom's hand as she passed a few years ago. When my dad passed last May we were allowed us to visit with him when his time was near -- something many didn't get the chance to do. We should let this go." -- Mark Hennessey of Connecticut, tweet reply to Freep reporter 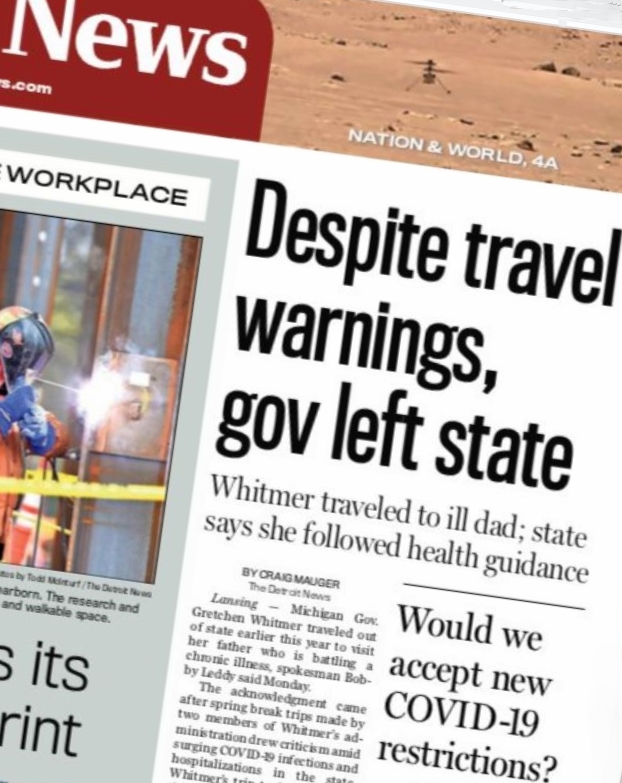 ► "I don't see a problem with her visiting her father, who could be seeing his last days, just like anyone else should be given the same opportunity." -- Jeffrey H., also a Freep subscriber

► "What did she do wrong? She went at a time when the numbers were low and travel was allowed." – Don Coffman of Roseville, at Detroit News Facebook feed

► "Would you go if it was your father?" -- Billy Patrick, another Detroit News follower