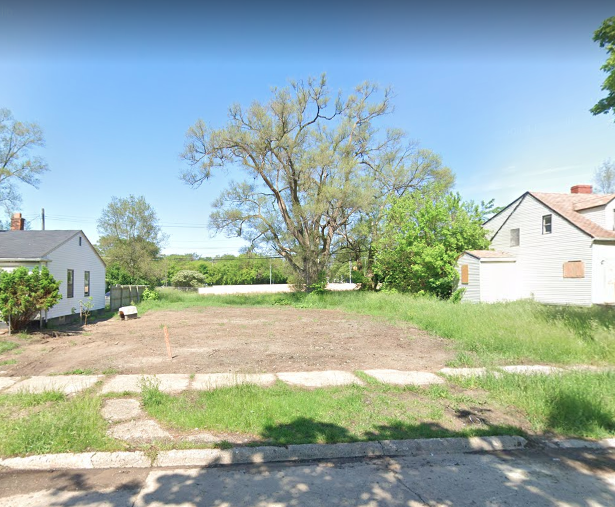 This lot on Fenmore in Detroit had toxic soil. (Photo: Google Maps)

Often when someone puts a shovel in the ground in Detroit it comes up dung.

The latest scandal: a demolition contractor used topsoil contaminated with heavy metals to cover city lots. And while the city knows about these health hazards, it has failed to adequately inform the public, according to a recent report by Detroit's Office of the Inspector General (OIG).

"Residents were not informed that they should avoid the lots while additional testing and evaluation of the topsoil took place," the report said, noting the potential health hazards, particularly to children and pets.

Chicago-based contactor McDonagh Demolition was initially found to have used toxic topsoil in 81 of 89 demolition sites. The dirt contains elevated levels of arsenic or chromium or lead or mercury, or all the above, according to the OIG. The soil was not purchased from a city-approved source and could cost up to $1 million to clean up.

So how did the administration react to that finding by its expert, AKT Peerless, an an environmental comapany, which conducts the city's soil testing? The city spent $100,000 shopping for a second opinion, which the OIG found "suspect."

That second opinion showed 23 of the 89 sites have poisoned top soil. The state is reviewing the results of those competing tests. Either way – 23 or 81 – mercury is poison.

"The OIG questions why an expert who is unfamiliar with program requirements would be hired to determine the suitability of topsoil," the report said of the second company hired.

More troubling, when inspectors were taking samples of McDonagh's topsoil, they also begain taking samples of the fill material below the top soil. And wouldn't you know it? Eleven samples came up filthy, or as AKT put it: the fill dirt “did not meet the (Land Bank) scope of service requirements.”

Testing was stopped at that point, writes the OIG. That's because the back fill was procured from a source approved by the city. That source provided fill material for thousands of demolition holes.

So imagine the potential scope of the problem with 15,000 houses demolished under the federally funded Hardest Hit Program. Poisoned topsoil. Poisoned back fill. This could potentially be Detroit's version of Flint.

This could also end up costing the city tens of millions of dollars to remediate. Money the Motor City does not have. Unless you count that Proposition N money citizens voted to tax themselves.

You might think people living near these questionable lots might want to know about potential health hazards as soon as possible. Unfortunately, officials making the decisions to withhold information don't live in those neighborhoods – not even close.

Initially, the mayor's office urged the Land Bank to issue a press release on the matter, according to the OIG, but the agency decided to hold off until it had more data. Then the mayor's office encouraged the Land Bank to post all soil sampling data and scientific analysis on its website, property-by-property. It did that, but it was hard to find, the OIG noted, plus not everyone in Detroit has an Internet connection.

The Land Bank says that the 23 sites pinpointed in the second opionion have been corrected and if the other places end up being problematic, they'll be fixed as well.

"Today, all 23 sites that required corrective action are complete and compliant with the Scope of Services and Detroit residents can feel confident that the process has prioritized public health," the Land Bank said in a statement.

Confident. You must be kidding.

We've received rafts of reports from Washington to Lansing to Detroit documenting the scandals with demolitions. This mess is far bigger than McDonagh, which is no longer being used by the city.

The press? Where are the people who are supposed to inform the public? Not enough are paying attention, as was the case in Flint or with Michigan's nursing homes during the pandemic.

You've got to hand it to Mayor Mike Duggan. He can't manage crime and he can't manage demolition, but he's a master of managing the press. He buys up local media personalities past their prime or young reporters not ready for prime time. This fronts a pretty face on what could be a very ugly problem for the mayor.

As the old saying goes, the government has all the time and all the money in the world. Federal agents still are conducting interviews and issuing subpoenas.

But this mess has spanned three presidential administrations, and Detroit continues to get dumped on.

While sources say there will be more shoes to drop, it is worth remembering that there is a mayoral election this November. Any charges close to the election – whether they be for contractors or government officials – would be unfair and unneccesarily prejudice the voter. Anything after the election is too late for the voter to make an informed decision.

The Department of Justice needs to make a decision after five years of investigation and two grand juries: either shit or get off the block.