On the internet, this as known as a "self-own." 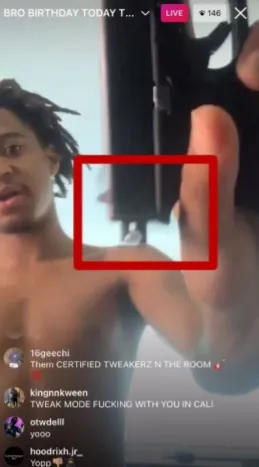 Convicted felon Delmarco Craig, 22, a rapper known as "The Big Homie," is prohibited from possessing firearms but prosecutors say he held a machine gun and other firearms during the Instagram video, including a Glock pistol equipped with a device that converted the semi-automatic firearm into a fully automatic machine gun.

Craig was ordered held without bond Tuesday pending trial on charges punishable by up to 10 years in federal prison.

What's more, prosecutors say one of the firearms has been linked to seven shootings.

Craig's Detroit lawyer says it's all for show:

“A lot of these young rap artists with social media today find themselves involving using guns in videos,” his lawyer, Steven Scharg, said. “That does not necessarily mean they’re thugs or believe in assaults. It’s just part of the façade of the rap industry.”

Whatever the upshot, it seems social media is the handiest tool for law enforcement since fingerprint technology was perfected.