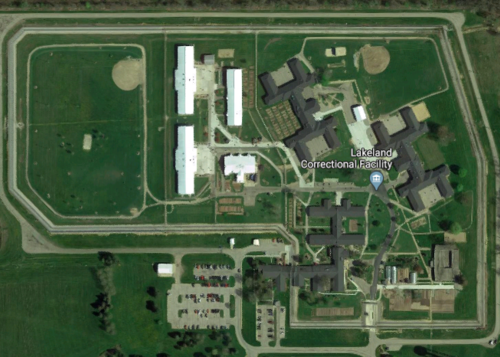 Inmates at a southern Michigan prison fear the water they use to cook, drink and bathe may be contaminated as a result of the facility switching from its own wells to a municipal supply, but corrections officials insist it’s safe.

The water at Lakeland Correctional Facility in Coldwater, south of Battle Creek, has been discolored on and off for several months, inmates tell Deadline Detroit and an advocacy group. Last week, it was brown, prompting some to boil tap water or avoid drinking it altogether amid high temperatures and a lack of air conditioning at portions of the facility. Others have complained of headaches and upset stomachs. Bottled water has not been made available, prisoners say.

Officials say quality tests show the water is in line with state standards. However, that testing is only conducted as the water leaves the city of Coldwater's treatment plant, not at the prison, the Michigan Department of Corrections clarified Wednesday.

“There isn’t a problem and we know the source of the issue, and so do the prisoners. We explain it all to them each time,” said Michigan Department of Corrections spokesman Chris Gautz. “Sounds like they aren’t telling you that we told them what it was and how to address it, so it will sound to you as if there is some problem we aren’t addressing. The exact opposite is true.”

Gautz says inmates were told they could address the issue by running the water until clear, but some say that isn’t happening, especially during nighttime hours, when use decreases. Guards stay hydrated with their own bottles and jugs while inmates say they aren’t even allowed to buy water from the commissary.

The “source of the issue,” meanwhile, seems to vary. 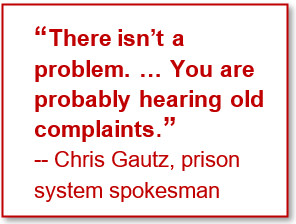 Gautz blamed last week’s brown water on plumbing repairs at one of the facility’s 16 housing units, which he said stirred up natural sediment and rust in the water lines. Issues two weeks ago were blamed on repairs to city water lines. A flush of the city’s water hydrants in late April, meanwhile, created “a rusty or discolored water situation,” he said. And issues several months ago were attributed to the city cleaning its aerators for the first time in more than a decade.

All of this was explained after Gautz initially downplayed the complaints, saying they came up at only one point several months ago and that “you are probably hearing old complaints.”

Prisoners in different portions of the facility have intermittently reported water that’s yellow, brown or of a blueish tint, including in February and late April, May and June, with some bouts lasting several days. In one portion of the facility, the issue has persisted since early June, Will Merriweather, a 66-year-old from Detroit, said Tuesday. The water has also been said to have different smells and tastes.

"It’s terrible," said Merriweather. "A lot of guys in here had coronavirus and that doesn’t help," he added, noting lingering symptoms from the disease. The prison, which opened in 1985, houses many of the state's elderly and medically vulnerable inmates.

Lakeland switched to Coldwater’s municipal water system in January, and the problems have stoked fears of a Flint-style reaction in the facility’s infrastructure. In 2015, corrosive river water caused lead to leach from that city’s aging pipes, poisoning tens of thousands of people as complaints of odor and discoloration fell on deaf ears.

“This never happened here until the water was switched from the well water to the city water and I believe the pipes need (to be) changed or flushed out,” one inmate wrote to advocacy group Humanity for Prisoners after reporting brownish water for three days in late May.

But Jeff Budd, director of the Coldwater Board of Public Utilities, indicated that’s unlikely.

“Repairs, breaks, flushing, fires, etc... can cause water to be temporarily discolored,” Budd said in an email. “This usually always dissipates within 12-24 hours; it just depends on a number of factors such as location and water flow in the area. There are always minimal dirty water complaints after hydrant flushing, main breaks, etc. … But the water is still safe to use.” 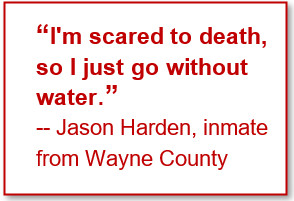 The city in Branch County regularly tests its water and has found no problems, he said. Initially, Gautz said the water was being tested weekly at the prison, but another MDOC spokesman confirmed Wednesday that that is not the case. Annual tests are conducted for lead and copper, she said, but it was not immediately clear whether one had been conducted since the switch.

That spokesperson added that infrastructure connecting the city system to Lakeland's water tower is new. The pipes connecting the tower to the jail are not.

Jason Harden, a prisoner from Wayne County, said he avoided drinking the water last Thursday, because regardless of the prison’s assurances, “the five senses are your first line of defense.” Harden said his brother recently died of lymphoma after being forced to drink contaminated water at a Michigan prison in St. Louis about 15 years ago, the source of which was reportedly a nearby site polluted with a byproduct of the long-banned insecticide, DDT. A class-action suit alleged prison officials did not provide inmates with an alternative water source, despite knowing of the problem.