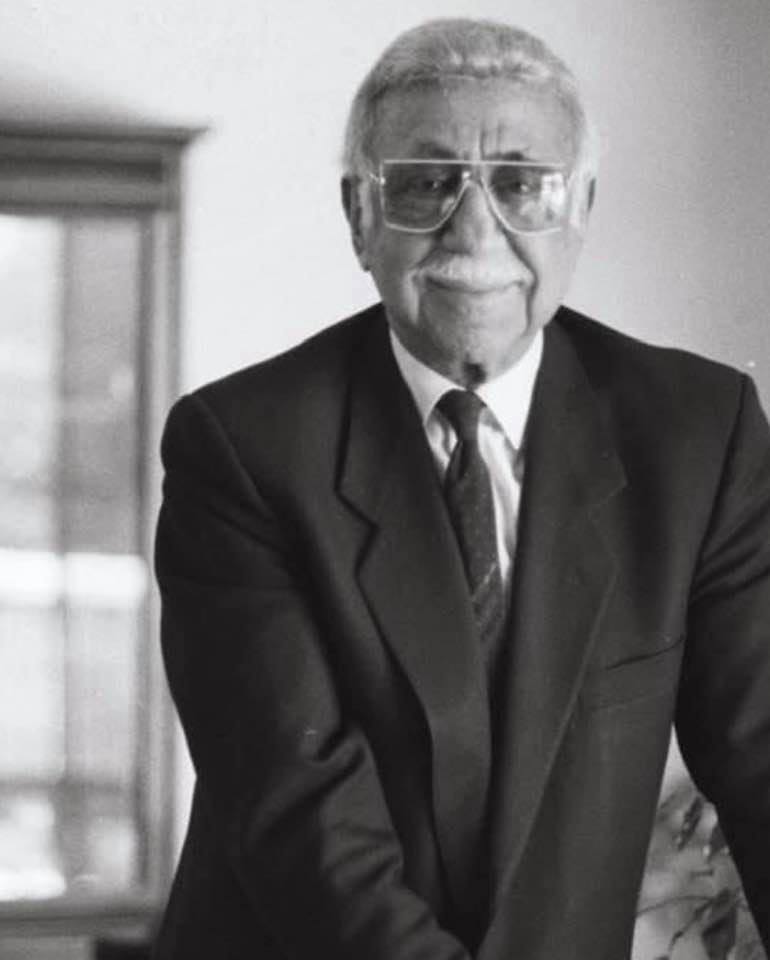 Danny Raskin, who wrote lighthearted columns about people and restaurants for the Detroit Jewish News for nearly 80 years, died Monday. He was 102.

Raskin was writing a column for the Southfield-based weekly until about five weeks ago when he fell at his West Bloomfield condo and broke a couple of ribs, his son Scott Raskin tells Deadline Detroit. He was recovering from the accident, but then began to decline and passed away at a nursing facility in Bloomfield Hills.

"He loved everything about it," Scott said of the column. "His whole life was being out with people and hearing the stories and translating that and writing about it."

Raskin worked at the Lansing State Journal and The Detroit News before joining the Jewish News.

In 1942, at age 23, while working downtown at The Detroit News, midnight to 8 a.m., he got a call from Phil Slomovitz asking if he'd like to be an associate editor for a Jewish publication he was starting, Raskin recalled in a 2012 interview for his 70th anniversay at the paper.

"I didn’t accept the job as associate editor because, at first, I didn’t want to leave my other job. I said I’d help out. I wrote a column called the Jewish Youth’s Listening Post.

"The Jewish News took off with the first issue. Soon, I left The Detroit News when Phil offered me a terrific deal. I did all kinds of writing, sold advertising and helped out in many other ways.

"During World War II, I used to do a lot of work with the boys in service," he said. "They would send me letters, and I would send letters to a lot of them. One of them, Bobby Shan, dropped a bomb on Germany that said, 'From Danny Raskin to Hitler.' We put the picture in the paper. I also worked with the USO. I sang and danced. And I helped sell a lot of War Bonds and got a citation from the War Department."

He explained how he first started writing about restaurants after doing a write-up about a place called "Seros" on Griswold Street in downtown Detroit -- now Cafe D'Mongo's.

"They used to give me a loaf of bread with brisket of beef. I like to dunk, and, man, was it delicious," he said.

After that, Slomovitz asked him to write a regular restaurant column in addition to his other one. Eventually, in 1986, he combined the two. For generations, Raskin's columns were well-known in the Jewish community in Metro Detroit, and it was a platform restaurants loved to get mentioned in.

Raskin's first marriage lasted about 10 months. In the 1960s, Raskin married a second time, but it ended in divorce six years later. Scott, who came from the second marriage, said his dad raised him for a while on his own.

He often went with his father to restaurants and sometimes fell asleep in a booth while his dad schmoozed. His father eventually met Frieda and remarried, and the two were together for 35 years before she died in 2010.

"She was really his partner and always his sidekick going out everywhere," he said. "They loved the life and went out constantly. There was not a Saturday they were not out. She was always dressed nice, she looked fantastic."

Raskin was also a dapper dresser. "He must have had 40 custom suits in his closet," Scott said.

He said his father was a "strong personality. A character. He was like a Godfather personality."

He says he would sit in a booth and convince the owner, no matter how busy, to sit and talk to him. Raskin would pull out a folded piece of paper, scribble notes and ask some pointed question.

Raskin didn't just write about the food. He'd talk about the great service from a waitress, and name her, and maybe mention who he ran into. He also noted weddings and birthdays and tossed in a joke or two.

He'd also write about restaurant history, as he did in May:

Owner Nerio Lelli of Lelli’s Inn on Woodward, Detroit, was about as round as a ping pong ball and twice as bouncy … He was a thoroughly likeable fellow, full of buoyant good humor and optimism, who liked to refer to himself in the third person as “the doctor.”

Signor Lelli would tell you half seriously, half kiddingly, that his was the best restaurant in Detroit … and he was the best chef. … After you met him and talked with Nerio, you probably would have agreed with him.

He enjoyed the celebrity status in the Jewish community and among restaurant owners.

Photographer Linda Solomon of Bloomfield Hills reflects on Facebook about his longevity:

"My heart is broken. Danny Raskin was still writing his weekly column at 102 years old until a recent home fall. I called him a few weeks ago and he sounded great. He was in physical therapy and asked me to call him back. This was our last conversation.

"I will forever admire his incredible zest for life. Frankly, not many could keep up with his stamina at any age. I know I couldn’t. And no one had a better memory. I will ALWAYS treasure our friendship and will be forever grateful to his genuine kindness and life-long interest in my career. He was always supportive of my work."

Mark Zarkin, owner of Steven Lelli's on the Green in Farmington Hills posts on Facebook:

The Funeral will be held Thursday at 2 p.m. at Ira Kaufman Chapel at 18325 W. Nine Mile Rd., Southfield.