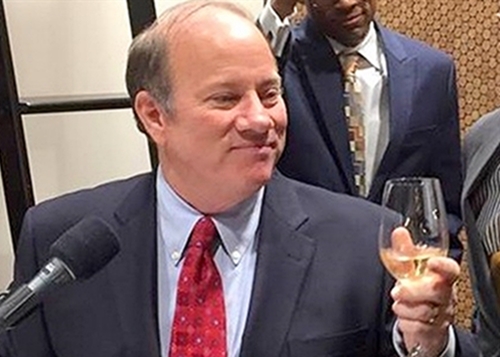 The second-term mayor has reason to toast. (Photo: Bedrock Detroit, 2015)

He raised more than $1.1 million since January, according to recent disclosure documents cited by the Detroit Free Press. Anthony Adams is the next-highest candidate at $160,575, Dana Afana reports Tuesday.

According to campaign finance reports detailing contributions from Jan. 1 to July 18, executives at companies such as JACK Entertainment, Blue Cross Blue Shield, Quicken Loans, Amtrak and more have poured about $7,000 each. or more into his campaign.

The paper quotes a statement from campaign manager Alexis Wiley, who says in part:

"40% of all our donations are $100 or less and nearly 400 of our contributions came from people who have never donated to the Mayor's campaign before. That's something that our campaign is proud of."

Duggan took office in 2014 and seeks a third term this year.