Southeast Michigan's brief break from fierce weather appears to be in jeopardy. A thunderstorm with high winds is approaching, and the National Weather Service puts seven Metro Detroit and surrounding counties under a flash flood watch until 10 a.m. Thursday.

"Storms will be capable of producing scattered severe wind gusts and torrential rainfall," the service posts in late afternoon, adding: 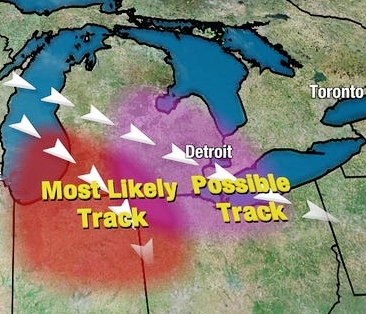 "Potential exists for total rainfall of one to three inches along and south of the M-59 corridor, including Metro Detroit. Rainfall rates in excess of one inch per hour are possible."

It's just four days since tornadoes hit western Oakland County and part of Macomb. Tree-snapping winds blacked out 133,200 DTE Energy customers throughout the region, some until Tuesday.

"Here we go again -- another strong system is barreling into Michigan and we all should be prepared," Fox 2 News meteorologist Derek Kevra posts Wednesday afternoon. "Power outages will be a major concern."

About half of [the forecast models] have the storms walloping Southwest Michigan, while the others have it moving more towards the Southeast side [of the state]. ...

Seeing a gust over 60 mph is not out of the question. ... Heavy downpours are likely too, which may lead to another round of flooding. Medium hail is likely in the core of this storm too. ... it looks clear that the commute will be a mess.

In a tweet, Kevra adds: "Flooding is highly possible."

WDIV's meteorologist, Brandon Roux, shares this bright note: "This will be the wettest stretch of this week."