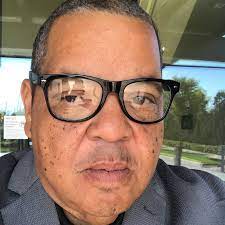 Steve Hood, a TV and radio personality and political analyst, who often had inside information on Detroit politics, died Thursday after a battle with cancer. He was 58.

A native of Detroit, he graduated from Cass Tech High School in 1981 and Emory University in Atlanta in 1985 where he earned a degree in biology. Hood, who was never shy about expressing his opinion, lived on a canal off of Jefferson Avenue on Detroit's east side.

He was a political and community activisit who hosted a morning radio show on 910 AM for a while. He later hosted "Detroit Wants 2 Know" on WKBD-TV and HULU, which addressed issues facing Detroit and its suburbs. He also hosted a daily Internet radio show, "Wake Up With Steve Hood."

His Linkedin listed him as president of Ronin America, which produces independent television programming and provides "aggressive political consulting."

Hood was the son of the late Detroit City Councilmember Nicholas Hood Sr. and Dr. Elizabeth F. Hood. His brother, Nicholas Hood III, is the pastor of Plymouth United Church of Christ.

"Steve and I have been friends since I was 14 years old. He's always been a loving and courageous person. The world has not always been a kind place and Steve always worked to make it a little bit kinder and a little bit more considerate for people who didn't have."

► To support Deadline Detroit's independent journalism, please sign up for a $3 a month membership or a one-time donation

Bowens said though he never ran for office, Hood found other ways to contribute to the good of the community. He taught Sunday school and organized, chaperoned and helped raise money for college tours.

“I loved Steve Hood. He was brilliant, funny, opinionated, and never afraid to speak the truth to anyone.
Above all, he was a man of deep faith.  He taught Sunday School on weekends, but also believed that God meant for us to enjoy every moment of our life on earth.  Even as he battled cancer, he never lost his sense of humor, his love for his family or his love for Detroit. He's forever one of my greatest teachers and friends."

"He was a hell of a political strategist when it came to crunching voter numbers."

Bowens: Farewell to Steve Hood, a Friend for Life, and for Love