Another of Detroit's most-recognizable skyline features just pounded a For Sale sign into the lawn: The Fisher Building. 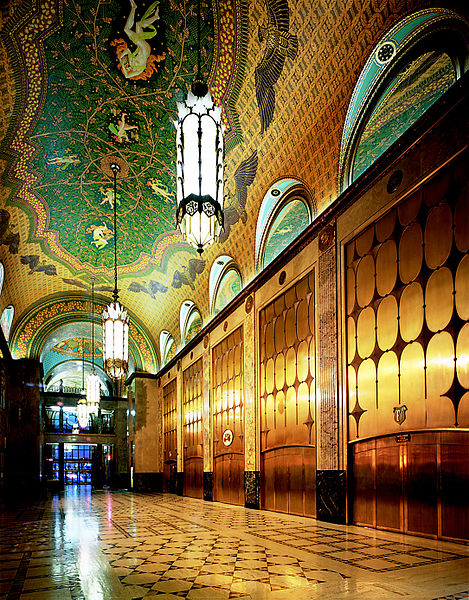 The Fisher Building is known for its beautiful ground-floor spaces. (File photo)

Crain's Detroit Business reports the woes of its majority owner, HFZ Capital Group of New York City, appears to be driving the sale, although a minority partner, The Platform LLC, did not confirm that. HFZ Capital is facing foreclosure on at least one condo project in New York City, and cash from a Fisher Building sale would improve its financial position.

A sale would also get more cash to The Platform for its myriad Detroit developments and redevelopments as it refocuses its efforts on neighborhoods where it has had the most success.

For years, the Fisher's ownership structure has been described as a joint venture between The Platform, HFZ and New York City-based Rheal Capital Management, which is headed by Detroit native John Rhea. ...It turns out HFZ owns 65 percent of the building, plus a pair of parking decks and surface parking totaling close to 2,000 spaces, which are included as part of the sale effort, according to (Peter) Cummings, (The Platform CEO).

The original partnership bought the Fisher Building, the nearby Albert Kahn Building and the parking assets in an online auction in July 2015 for $12.2 million, Crain's reports, and has subsequently spent $30 million on the Fisher alone. The Kahn building was sold separately.

No price was listed for the Fisher Building, as it has yet to be formally listed.