Republicans have controlled the state Senate since the early 1980s and now have a 22-16 advantage in the chamber, but Democrats would have an edge in 20 districts under the “Linden” map approved by the citizens panel, according to a Bridge Michigan analysis.

The 13-member redistricting group also approved the “Hickory” map for the state House that gives an advantage to Democrats in 57 of 110 seats, according to the group's analysis. Currently, Republicans hold a 55-52 advantage and have led the chamber for more than a decade. 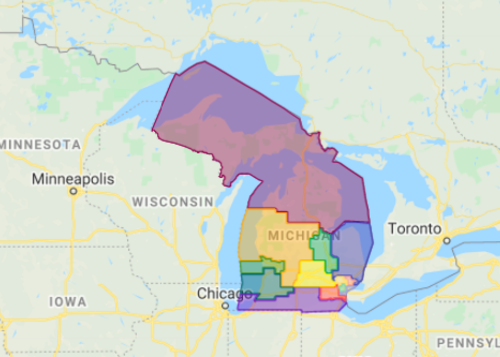 Past state elections have seen Republicans win the vast majority of seats in both chambers even though tens of thousands more votes were cast for Democrats.

At the federal level, a Bridge analysis found Congressional Democrats now have a 7-6 edge, though The Detroit News reports five new districts lean Democrat, five lean Republican, and the remainder of toss ups.

The congressional map will yield at least one contest between incumbent colleagues.

Other changes could include Rep. Brenda Lawrence running in the 12th District after losing her 14th District seat to population decline. The 12th includes Lawrence's native northeast Detroit and longtime home of Southfield, but the remainder of the district is largely new to her, The News reported. She's currently the only Black member of the state's Congressional delegation.

Rep. Debbie Dingell has said she'll run in the new 6th District covering Washtenaw County and western Wayne, which includes much of her current district. That will involve a move from her current home in Dearborn.

Meanwhile, the state's toss-up districts are:

• The 7th, covering the Lansing area and Livingston County, where Rep. Elissa Slotkin is expected to move to run. The new district contains about two-thirds of her current constituents.

• The 10th, covering parts of Macomb and northern Oakland County, where John James is expected to run. The seat is currently held by first-term Republican Lisa McClain.

A court challenge of the congressional map is possible, Bridge reports, as it eliminates the state’s two majority-Black congressional districts.

A closer look at the state House, Senate and congressional maps is here.