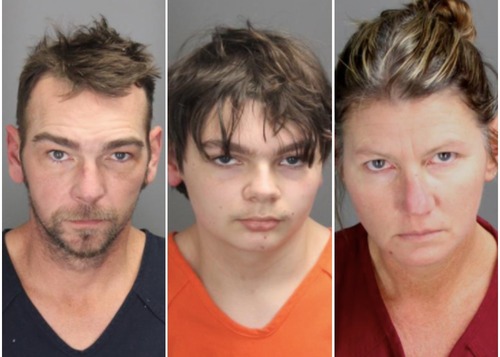 Bad news if you hate the Crumbley parents and want to see them get got for the school shooting they allegedly helped precipitate: They're not being tried in the court of public opinion.

Just kidding — you knew that. But the involuntary manslaughter charges against James and Jennifer — widely reviled for buying their son a gun and ignoring warnings that he was the type of kid who would one day shoot up his school — will be difficult to prove, the Free Press reports in a lengthy analysis out today.

Never have the parents of a child shooter been found criminally liable in the U.S. The Oakland County prosecutor's main hurdles will reportedly be proving the Crumbleys knew their son was homicidal and that they had a duty to act.

No law exists requiring parents to intervene, experts tell the Freep. The Crumbleys didn't even have to share that their son had access to a gun after they were called to Oxford High School over his violent drawings, says longtime criminal defense attorney Bill Swor.

According to multiple legal experts, there is no legal duty on the general public to take action to prevent harm to others. For example, if a shopper witnesses a robbery in action, there is no duty for them to intervene. If someone is drowning and you don't step in, you won't be charged.

A duty to act is typically reserved for those in positions of authority.

The prosecution disagrees, arguing that the Crumbleys had multiple parental duties that they failed to perform, including:

- A duty to ask their son about the gun when they were summoned to the office over his violent drawing.
- A duty to search his backpack, which police believe contained the gun used in the shooting.

- A duty to drive home immediately after the school meeting and check for the gun.

"Where do they come up with these obligations? There’s no law that says they have to do any of those things," said Swor ....

"I’m no gun fancier, but this is (BS). This is lynch-mob mentality," said Swor, stressing there's a difference between civil and social liability and criminal liability.

That second sentence — "A duty to act is typically reserved for those in positions of authority" — prompts another defense attorney to ask why there are no criminal charges for school officials, who sent Ethan back to class (though first asked his parents to take him home and required they enroll him in counseling). The school faces only civil suits.

As for whether the Crumbleys kept the gun locked or not — that reportedly won't be of consequence in the criminal case, as there's no federal or Michigan law requiring gun owners to safely store their weapons. It is, however, reportedly illegal to gift a kid a gun.