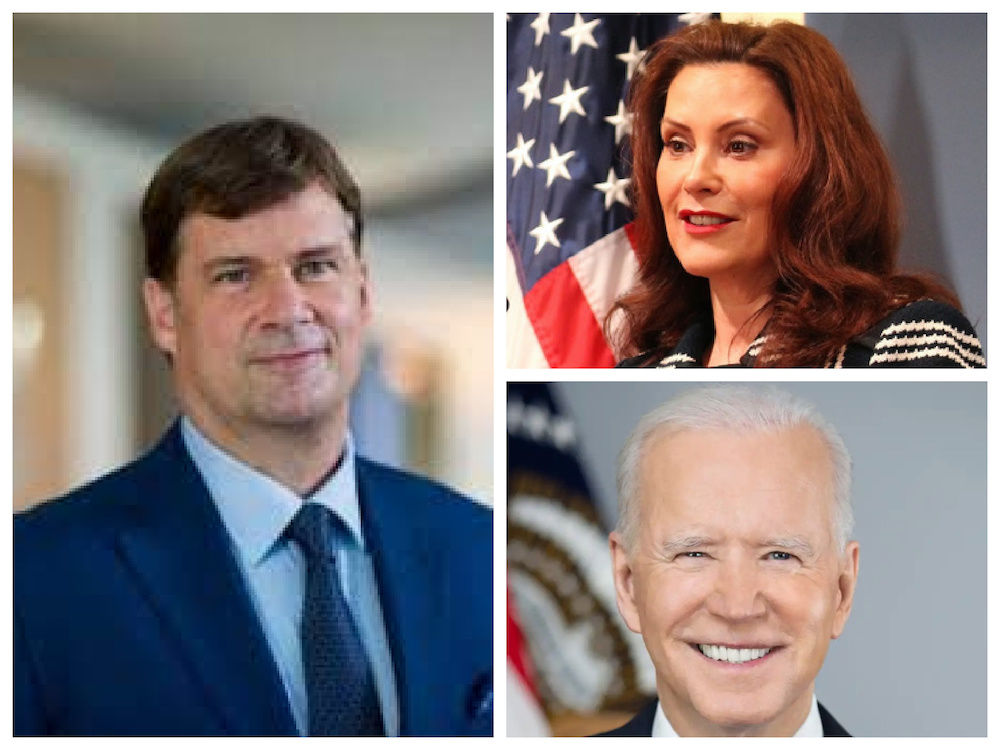 Supposedly as one ages one’s memory goes south, so I’m delighted the old noggin is still functioning a lot better than the legion of faulty Ford vehicles endangering U.S. and Canadian roads. Reading this Bloomberg exclusive story that Ford CEO Jim Farley is looking to lay off some 8,000 salaried workers in the U.S., I immediately recalled President Joe Biden’s State of the Union in March during which he was singing Ford Motor Co.’s praises.

“Just look around and you’ll see an amazing story,” Biden gushed. “Companies are choosing to build factories here, when just a few years ago, they would have built them oversees. “Ford is investing $11 billion to build electric vehicles, creating 11,000 jobs across the country.”

Biden doubled down on his praise for Ford in June after Tesla founder and CEO said he had a “super bad feeling” about the economy and that he would lay off 10 percent of Tesla’s workforce. “So, you know, lots of luck on his trip to the Moon,” Biden said, referring to Musk’s space exploration company SpaceX, which in recent weeks has launched several successful rockets.

According to Bloomberg, Ford employs some 31,000 salaried workers in the U.S. where the bulk of the firings are slated to occur. Although Bloomberg chose to soft pedal this detail, I’m not so generous: The firings represent 26 percent of Ford’s salaried workforce in the U.S. Presumably, many, if not most, of those employees work at Ford’s Dearborn headquarters.

When Farley told the New York Times in a 2008 interview that “I don’t care about Detroit,” he clearly meant it.

Playing politicians for fools is something Farley and Ford have shown remarkable skill. As I reported for Deadline Detroit last October, Ford demonstrated that Michigan Governor Gretchen Whitmer, and Reps. Rashida Tlaib and Debbie Dingell are way out of their depths dealing with Ford. The Michigan pols naively believed Ford’s claim in July 2021 that it planned to make Michigan “a centerpiece of its focus on EV” and hailed the company and its products.

Two months later, Ford announced plans to invest more than $11 billion in Tennessee and Kentucky to build a mega campus in Tennessee and two battery plants in Kentucky, promising to create more than 11,000 jobs in those states. It was the largest investment ever announced in Ford’s history.

Bloomberg reported that Farley’s layoffs would be in his newly created Ford Blue unit responsible for producing internal combustion vehicles, as well as other salaried operations throughout the company. It’s all part of Farley’s grand scheme to cut $3 billion in costs by 2026. Farley believes there are ample enough chumps who will continue buying Ford’s gas engine vehicles, despite an alarming number of recalls for serious issues, including SUVs spontaneously catching fire and Ford Broncos experiencing engine failure with less than 10,000 miles.

Farley plans to use the profits from the chump sales to find research and development for Ford’s electric vehicles.

Ford in recent years has been offshoring critical jobs to India, where the company employs more than 11,000 workers; last September Ford announced plans to “significantly expand” its India workforce “to focus on engineering, technology, and business operations centers of excellence.” Earlier this year, the Detroit Free Press reported that Farley cut 580 jobs, mostly in the “engineering function.”

Meanwhile, in Mexico, Ford has significantly expanded its engineering and manufacturing capabilities and presence.

From a June 30th report in Ford Authority, a trade publication:

The Ford Engineering Center is the largest facility of its type in Latin America, and it experienced a 900 percent growth in personnel from 2010-2022. Mexican engineers were significantly involved with the Ford Bronco Sport, as Ford says over 70 percent of its engineering took place there. Additionally, the compact off-road oriented crossover is manufactured at the Hermosillo Assembly plant in Mexico. On a related note, nine Mexican engineers worked on instrument panels for the 2022 Ford Expedition and 2022 Ford F-150 Lightning.

“Ford Mexico’s Engineering Center has evolved so much in recent years that we have become a fundamental arm for the company’s global projects. For many years, we thought that Mexican talent was mainly related to Manufacturing, but today, we have shown that we are equally or more valuable than the design engineers in countries like Germany, Australia or the United States,” said Marcos Pérez, director Product Development at Ford of Mexico.

In addition to needing R&D capital to fund the development of its electrical vehicle business, one must imagine that Farley needs to squirrel away funds to settle multiple class action lawsuits filed against the company for selling faulty vehicles, sometimes knowingly. This includes an action relating to Ford’s Mexican-made electric Mustang, which was recalled last month for a problem that could cause potential engine failure. Ford has yet to figure out how to remedy the issue.

Farley is a media darling, and he believes his fawning press coverage that he’s a serious threat to Musk and Tesla. In May, Ford ran an ad poking fun at Musk without mentioning him by name.

“Right now it could seem like the only people that matter at the loudest,” said a voiceover while a hand scrolled across a smartphone. “Those who want to tear things down, and then fly away on their personal spaceships when things get hard. But we’ve got 182,000 people and they’re building.”

Say what you want about Elon Musk, he determined more than six weeks ago the economy was turning south and he needed to downsize his workforce. And while Teslas have racked up their share of recalls, Musk introduced a pioneering technology while Ford can’t manufacture quality and reliable gas engine vehicles.

That Biden chose to celebrate Ford while mocking Musk, speaks to the president’s judgment. Whitmer, who Biden seriously considered as his running mate, also has demonstrated she’s clueless about Ford and its tenuous relationship with Michigan.

As I’ve repeatedly predicted, in due course Farley will relocate Ford’s electric vehicle business to a state with better political leadership and a more favorable business climate. As payback for Whitmer’s generosity with Michigan taxpayer money, I expect Farley will wait until after the November election.