This article from July 17 is the fourth repost of notable 2014 content, based on readership and editors’ choices. The Top 10 series runs through Dec. 31. See links to previous installments at the end.

It suddenly broke out on social media this week.

Hundreds of Detroiters -- those who lived, worked or galavanted about the city in their younger years, are posting boasts and reminlscences that begin: "I'm so Detroit, I . . ." Many use the hashtag #imsodetroit. 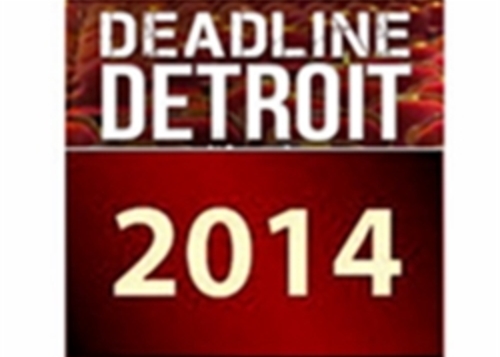 Some still live in the city. Some have moved to the burbs. Some always lived in the burbs, but considered Detroit their home.

Jocelyn K. Allen, GM's director of regional., grassroots and diversity communications, is "so Detroit that I love seeing all the love the Detroit is getting on Facebook and Twitter."

Steve FIshman: I'm so Detroit that I can remember leaving basketball practice at Mumford during Christmas vacation, riding the bus downtown to the Fox with Larry Moore for 25 cents, going to the Motown Revue and seeing the Tops, Tempts, Smokey, Stevie, Marvin, et al for $1.50, spending another quarter to ride the bus home. A grand total of $2 to see the best talent in the world

Lauren Hood: I'm so Detroit, I went to 3 Floors of Fun at St. Andrews when it was actually 3 floors and actually fun!

George Hunter: I'm so Detroit, my grandfather taught Bill Bonds how to drink!

Kim Trent: I'm so Detroit that I bought my very first album ( Cheryl Lynn's self-titled debut) at Simpson's, owned by Donnie "Love Bug" Simpson's parents. #Iamsodetroit that I was shocked to see that Ollie Fretter died the other day because I assumed he'd been dead since the 80s. I'm so Detroit that I went to David Ruffin's viewing at Swanson's Funeral Home and had to comfort my mom who cried so hard and performed so dramatically that there were people in the audience who thought she was his widow.

Jim McFarlin: ‪#‎iamsodetroit‬ that my only area code is STILL 313! [He lives in Champaign, Illinois]

Ric Bohy -- I'm so Detroit I attended Parker Elementary, George Ford Junior High and Mackenzie High -- all of them now gone -- and lived to get a university degree. I'm so Detroit I swam in Rouge Park's Brennan Pools, jumping off the "top deck" of the diving tower as a rite of passage, a half century before the current multimillion dollar renovation there. I'm so Detroit I misspent a good deal of my youth at the Anchor Bar, and once watched Leo scream at a panhandler for lying, all the while peeling bills off the fat bankroll he kept in his pocket and giving them to the guy. Leo didn't mind begging, he hated lying about it, so much that his nose began to bleed while reaming the guy out at top volume. I loved that man. I'm so Detroit I spent many, many weekends paying 25-35 cents for triple-feature horror movie matinees at neighborhood theaters including the Tower, the Great Lakes, the Beverly, the Norwest (I think) and others. All too are long gone

Jocelyn K. Allen: I'm so Detroit that I remember getting my Barbie blow up furniture from Spartan Atlantic, modeling at Kingsway, and going to the Cunningham drugstore.

Sylvia Hubbard: I'm so Westside Detroit,  I remember the sticky floors at the  Northwest Movie theater.

Jon Zemke: I'm so Detroit I buy property in bulk.

Brenda Perryman: I'm so Detroit that my boyfriend and I were sitting at the red light Davison and Dexter when I noticed that the car to our right had eyeglasses painted on the door. I looked at the man driving and saw it was David Ruffin of The Temptations. I started to get out of my boyfriend's car and knock on David's car window, but I didn't.

Aaron Foley: Don't tell me how Detroit you are unless you tripped over dead dogs in the islands of West Outer Drive during track practice because your high school didn't have a track.

Darrell Dawsey: : I'm so Detroit...I used to sport jingle boots with my keys on the back; I bought those ugly GASS shoes from Kenney's on Warren and Conner; I watched the Pistons when their home court was at Cobo and Kevin Porter played point guard and Bob Lanier was at center; I used to try to catwalk my bike from Mack to Charlevoix; I dug holes on the sides of my friends' houses to shoot marbles; and we used to have flipping contests in the middle of the street. Lol If you don't know what it means when someone shouts out "hand, hand, no-hand," you probably weren't there. ; )

Oneita Jackson: I'm so Detroit, natives sweat me because l represent harder than they do.

James Harris: I'm so Detroit I remember us running from the Mercury because we were getting shot at. When we got back to the block my boy had a gunshot hole in his fake Gucci hat! I'm so Westside Detroit , I remember riding my bike to get lemon ice cream on Ewald Circle & Fullerton ......DAYUM I miss it

Stephen Henderson: I'm so Detroit that, on the line for "doctor" on my birth certificate, it says: Charles H. Wright.

Darrow Harden: I'm so Detroit I remember sneaking into the Brass Key when I was 16 with Quentin P. Eaton, James Harris, David Coleman, Cory Mac and a few others.

Gary Freeman: I'm so Detroit, I remember the scent of Wonder Bread being baked from the John C. Lodge Expressway going Downtown

Devita Davison: I remember when the street lights worked; because I had to have my ass on the porch when they came on!

Steve Dorsey: I'm so Detroit I still own a piece of it more than a year after leaving.

Monica Morgan: I'm so Detroit I remember the zoo at Belle Isle

Oralandar Brand-Williams: I am SO Detroit that I can remember the city's old and beautiful architecture in its glory before the wrecking balls -- Riviera Theater, Little Harry's., J.L. Hudson, etc.

Curtis Blessing: I'm so Detroit I saw Spencer Haywood's first game at U. of D. when he ended the game about five minutes into the second half with a dunk that broke the backboard. I'm so Detroit, the only time I was ever mugged was in front of the gas company building walking to catch the Vernor bus home after a benefit concert for the UNCF by Motown groups at Cobo Hall.

Allan Lengel: I'm so Detroit I remember going to my father's bar, the Strand Lounge, on Sunday mornings at Grand River and 14th (around the corner from the 20 Grand) in junior high to help clean up before the noon opening; playing James Brown, the Supremes, Otis Redding and the Temptations on the juke box, getting a shoe shine at a place that doubled as a blind pig, and before we got down to the bar, eating breakfast at Greene's Hamburgers at 7 and Greenfield. And oh yes, reading a newspaper that featured Detroit bars and seeing a photo of Tigers slugger Gates Brown drinking at the Royal York Bar, which was across the street from my father's bar, and wondering if he ever came to my father's bar.

Alexa Stanard: I'm so Detroit that I have a Boblo Island t-shirt (that I bought as an adult from Naka, but whatever).

Teferi Brent: I'm so Detroit I remember Ms. Clementine Barfield and Vera Rucker organizing other Mothers and Fathers of murdered children to co-found Save Our Sons and Daughters (SOSAD); I remember the Malcolm X Grassroots Movement in Exile and the NAACP having their meetings at Lewis College of Business, sometimes on the same day; I remember Farrakhan and Chokwe Lumumba speaking at Little Rock Baptist Church back to back; I'm so Detroit I remember regional school board meetings and going with Errol Anthony Henderson to these meetings arguing for African Centered Education; I remember Murray Wright demonstrating at their own school demanding better education; I remember organizing with brother Minister Malik Shabazz and Kwame Kenyatta in the early 90's to shut down Gas Stations and Coney Island's where young Black men were being shot weekly by Arab owners; I remember Black Student Activism and demonstrations at UM in 84-87; I remember Errol Henderson, Darrell Dawsey, Mikail Ansari, and T Pharaoh Muhammad, along with others,organizing a Sit-in at Wayne State 89 resulting in a Africana Studies Department; I remember when Considine Rec use to teach boxing to you men; I remember Operation Get Down teaching Martial Arts and Having the coldest youth drill team in the nation! I am bona fide Detroit!

Blanche Troupe: I am so Detroit. I remember shopping with my mom at Sears and Roebuck on Oakman and Grandriver. I remember Robert Hall store and Kresges that eventually became K Mart. I remember going to Hudson in the Winter time, Christmas time to see Santa Claus and going through that wonderful Christmas wonderland before I got to see him. I remember the days before Northland mall was closed in and it was cold outside going from store to store. I remember Edgewater Park and Boblo Island over in Amesburg Canada. I remember living on Tuxedo and Roosevelt, Durfee, and Central schools... I remember the plastic wigs and singing with my friends. I remember we all wished we could go to Motown on the Grand Blvd and become great stars. I remember going over ALL of my cousins' houses and spending the night and we had great fun because everybody lived in the D at that time. I remember St Paul AME Zion church on Dexter and the beautiful hot summer days and nights when I set on the front porch with my brothers and sister....and I remember Top Hats, White Castles and the Red Barn Hamburgers on Woodward Ave in Highland Park.

Robin Mather: I'm so Detroit that one of my first jobs was at the beautiful Adler-Schnee store on Harmonie Park (I lived in the hotel across the park). And when I got homesick, I'd walk over to the Anchor Bar (it was in its basement location then, and Leo was king of all he surveyed) so I could eavesdrop on the pressmen's chatter and smell the smell of printer's ink, which reminded me of my father.

Darren Nichols: I'm so Detroit that I screamed for Moe Ager and Brandon Jenkins in the last row at the Final Four in St. Louis; remember seeing the Supreme Court beat Antione "The Judge" Joubert; Cobo filled to the rafters for a PSL final; Pat Ford in the old gym at Cass; Markita Aldridge against Laurie Aaron (enough said); Isiah Thomas score 16 in 93 seconds; a Steve Smith triple-double; Rashad drop 42 on Pershing; Game of the Week at the State Fairgrounds; Dave Bing showing how it's done downtown; Antonio Gates lose; Archie Tullos against Hersey Hawkins at U of D; a C-OO-LEY cheer; Sydney Mitchell putting in work; a 52-2 Southwestern squad; Zeke hitting 26 in the 3rd quarter against the Lakers; Eric Money in a movie; a Lorenzo Orr dunk; Harold "The Show" Arceneaux at WSU; Cass score 115 points; Team Detroit; a CT girls comeback from 20; a 49-1 record at Calihan; .007; screams of Tico Brown and a midsummer night's classic.

Howard Hertz: I'm so Detroit I used to hang out at Plum Street.